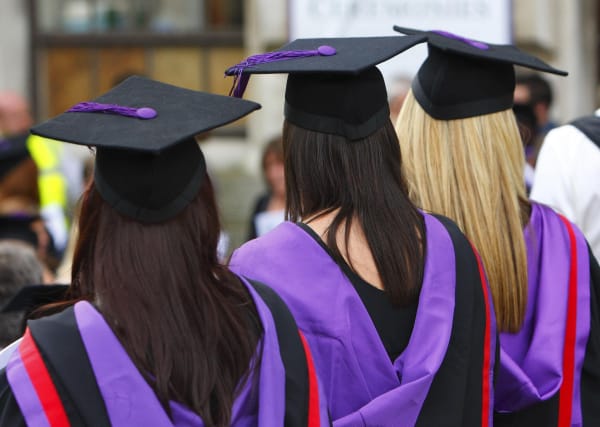 International students contribute more than £20 billion to the UK economy each year, according to a new report.

It argues that the financial benefits overseas university students bring far outweigh the costs of them studying here.

As well as contribution in terms of tuition fees, international students help to create jobs, and boost local economies, while a fall in numbers would mean job losses, and an impact on businesses such as taxi firms, sandwich shops, bars and nightclubs, according to the Higher Education Policy Institute (HEPI).

"Almost every part" of the British economy benefits from these students, the think tank suggested.

A new report published by HEPI and Kaplan International Pathways examined the economic costs and benefits of international students - both those from the EU and countries outside the EU, using data on more than 231,000 who started their studies at UK institutions in 2015/16.

It took into account factors such as the tuition fee income generated by these students as well as other income, such as spending in the local economy, the jobs that they help to create (such as work for cleaners and security guards), and spending of friends and family who come to visit them in the UK.

The analysis also included costs such as teaching grants to support universities' teaching activities, costs associated with tuition fee grants and loans provided to EU students, other public services provided to independent students and their dependants such as healthcare and education.

At the same time, the cost to the public purse associated with an EU student studying in the UK is £19,000 over the course of their studies, while for a non-EU overseas student it is £7,000.

The report calculates that overall, this means that the net economic benefit of all international students is equivalent to around £20.3 billion each year.

The findings come at a time of continued debate over the inclusion of student numbers in government migration figures, with some campaigners arguing that universities want to see more international students choosing to study in the UK, and that including them in the data, when the government is looking to cut the numbers, could potentially put students off.

"It is literally the sandwich shops, the bike shops, the taxi firms, it is the nightclubs, it's the bookshops. Almost every part of the British economy benefits from having international students."

He added: "Very often the university is the single biggest employer in an area. The university probably wouldn't go bust without international students, but some of the local companies might go bust. Some of the local resident population would lose their jobs and there would be less work to do in that town or city."

The report also shows that international students benefit all areas of the UK, not just big cities such as London.

For example, on average, overseas students make a £31.3 million net economic contribution to the UK economy for each of the 650 parliamentary constituencies. This is equivalent to £310 per member of the resident population.

Mr Hillman said: "International students bring economic benefits to the UK that are worth 10 times the costs of hosting them."

Gavan Conlon of London Economics, which conducted the research, said: "While our research focuses on economic impact, it would be wrong to imply that the benefits international students bring are only financial. In addition to their enormous economic impact, they also make our university campuses more diverse, resulting in educational and social benefits."

Alistair Jarvis, chief executive of Universities UK, said: "This report confirms the vital net contribution international students make to the UK. This is both in terms of their contribution to the economy, and their positive cultural and academic impact on campuses. It is clear that this positive impact extends to university towns and cities in all corners of the UK.

"It is estimated that international students support over 200,000 jobs in communities across the UK."