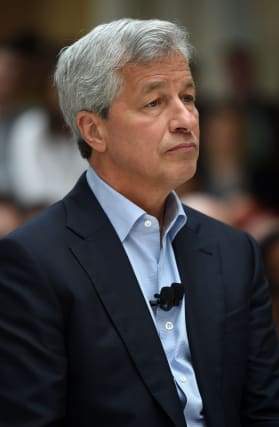 JP Morgan chief executive Jamie Dimon has backtracked on criticism of Bitcoin, saying he regrets calling the cryptocurrency a "fraud".

But when asked to address the topic, Mr Dimon said those were comments "which I regret making".

Mr Dimon admitted that elements of Bitcoin-related technology warranted attention, including distributed ledger technology or the blockchain, which is seen as an opportunity for financial services to strip costs, speed up transactions and serving as a central ledge to track and verify transactions that cuts out the industry's middlemen.

"The blockchain is real," he told Fox Business on Tuesday.

"You can have crypto yen and dollars and stuff like that. ICOs you have to look at individually", he added referring to Initial Coin Offerings which allow investors to exchange cryptocurrencies like Bitcoin for proprietary "coins" or "tokens" linked to a specific firm or project.

"The Bitcoin to me was always what the governments are gonna feel about Bitcoin as it gets really big, and I just have a different opinion than other people," the JP Morgan CEO said.

"I'm not interested that much in the subject at all."

But Bitcoin was unmoved by the admission and was trading lower by 4.2% at 14,330.10 US dollars, according to prices listed by Coindesk on Tuesday afternoon.

The cryptocurrency has fallen from its most recent peak in mid-December when it touched nearly 20,000 US dollars on some exchanges, though is still up significantly from the 900 US dollar mark it was sitting at one year ago in January 2017.

Bitcoin prices have been buoyed by the launch of bitcoin futures by both the CME and CBOE last month following US regulatory approval which has been hailed by proponents as helping to legitimise the use of the virtual currency.

Major international figures including Christine Lagarde of the International Monetary Fund have said "it may not be wise to dismiss virtual currencies".

But Britain's own Treasury has announced plans for closer scrutiny of the cryptocurrency as part of EU-wide plans that will require online platforms that trade in Bitcoin to carry out due diligence on customers and report suspicious transactions.

There are worries over the lack of regulation - as no Government or authority has jurisdiction over its use - and the fact that transactions are encrypted and hard to trace, making Bitcoin attractive to criminals.