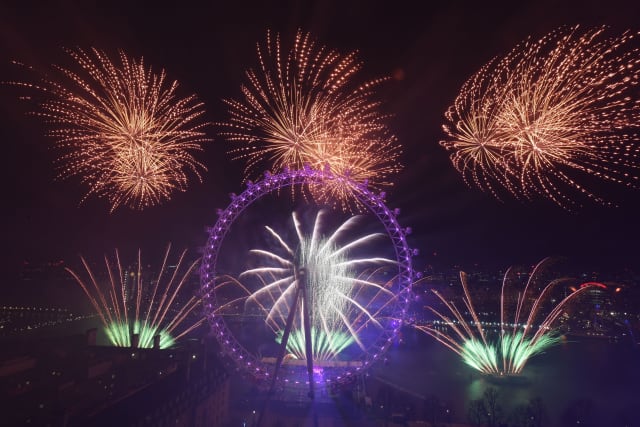 The UK has welcomed in the new year, with hundreds of thousands taking to the streets to watch dazzling fireworks and join lively celebrations.

Crowds swamped the banks of the River Thames in London for the 12-minute display after Big Ben's bongs rung out across the capital at midnight, having been turned back on for the festive period.

Gusts of up to 76mph were recorded in parts of Scotland on Sunday afternoon but conditions calmed, allowing one of the world's biggest street parties to go ahead as planned.

More than 100,000 ticket-holders watched London's New Year's Eve fireworks, which featured a soundtrack dominated by women to mark the centenary of women being granted the vote.

Songs by Aretha Franklin, Annie Lennox, Ariana Grande, Dua Lipa and Florence Welch were among those included in the women-only second half of the world-famous show.

More than 10,000 fireworks lit up the capital's sky during that sold-out event, prompting huge cheers from the lively crowd.

Scotland Yard confirmed fewer Metropolitan Police officers were working during this year's celebration, but security at the event appeared tight, with armed police on patrol and security barriers erected.

The huge event took place at the end of the year which saw London hit by four terror attacks.

In Edinburgh, tens of thousands saw in 2018 against the backdrop of Edinburgh Castle.

Underbelly, which is producing the event for the first time, promised the "best party ever" for the 75,000 people attending, with live music, DJs, street entertainment and the "ultimate fireworks display" from Edinburgh Castle.

Rag'n'Bone Man is headlining Concert in the Gardens, with Declan McKenna and Nina Nesbitt as support acts, while those performing on the three Street Party stages include The Human League, Sacred Paws, Treacherous Orchestra and Huey Morgan.

But those trying to get home from the fireworks have been warned to prepare for rail disruption due to strike action, including to services in and out of London Waterloo.

Members of the Rail, Maritime and Transport (RMT) union on South Western Railway (SWR) and CrossCountry walked out on Sunday for 24 hours in long-running disputes on issues including the role of guards on trains.

Many cities across the world, including Tokyo, Dubai and Beijing, have already rung in 2018.

In Sydney, spectacular fireworks lit up the sky above Sydney Harbour in Australia, where an estimated 500,000 spectators gathered to watch the display.