Theresa May: Britons will feel renewed pride in 2018 with Brexit progress 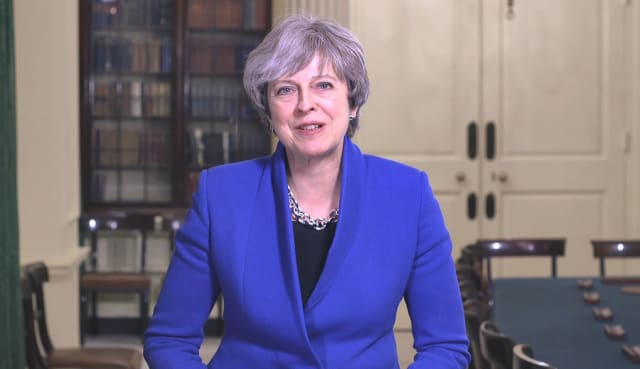 The next 12 months will allow Britons to feel "renewed confidence and pride" as the country makes progress on Brexit and creating a "stronger and fairer" society, Theresa May said in her new year message.

The Prime Minister said that although Brexit was "crucial", it was "not the limit of our ambitions" - highlighting her Government's approach to schools, the police and the National Health Service as signs that she was focused on issues affecting people's daily lives.

After a difficult 12 months which saw her decision to call a snap election backfire spectacularly, three scandal-hit Cabinet ministers forced to resign and continued unrest within Tory ranks over Europe, Mrs May acknowledged that "any year brings its challenges".

In her message, Mrs May said 2017 had been a "year of progress" for the UK and insisted that the divisions of the European Union referendum were in the past as "most people just want the Government to get on and deliver a good Brexit, and that's exactly what we are doing".

In an apparent reference to her own troubles, Mrs May said: "Of course any year brings its challenges - that is true for each of us personally, as much as for our country and the world.

"But the real test is not whether challenges come; it's how you face them.

"Whether you allow a task to overcome you, or tackle it head on with purpose and resolve."

In an upbeat assessment of the coming year, she said: "I believe 2018 can be a year of renewed confidence and pride in our country.

"A year in which we continue to make good progress towards a successful Brexit deal, an economy that's fit for the future, and a stronger and fairer society for everyone.

"And whatever challenges we may face, I know we will overcome them by standing united as one proud union of nations and people."

Mrs May said that everyone had the "right to be treated with respect" and "that means safe workplaces, free from harassment".

With politicians facing abuse on social media, Mrs May also called for a "public sphere where debate is constructive and courteous, and where we treat each other with decency".

The 100th anniversary of women being granted the vote should be marked with a "vow to eliminate all prejudice and discrimination from our society", she said.

Mrs May also noted that 2018 is the 70th birthday of "our precious NHS", defending the Conservatives' stewardship of the health service following frequent attack from critics about a lack of funding.

"We will continue to invest in our NHS and ensure it can deliver a world-class service now and for generations to come," she said.

As the nation marks the centenary of the end of the First World War, the UK will "remain a champion of peace and order" around the world and "we will continue the fight against all forms of extremism and support our security services as they work every day to keep us safe".

Perhaps mindful of viral social media criticism of the Tories over animal rights, Mrs May used her message to stress her green credentials, saying "we will protect and enhance our natural environment for the next generation" and vowed to use the Commonwealth heads of government meeting in April to press for action on tackling climate change and plastic waste in the world's oceans.

Meanwhile Labour leader Jeremy Corbyn used his new year's message to claim that his party was on the brink of power.

"We are a government in waiting," he declared. "The hope of a new Britain, run in the interests of the many, not the few, is closer than ever before."