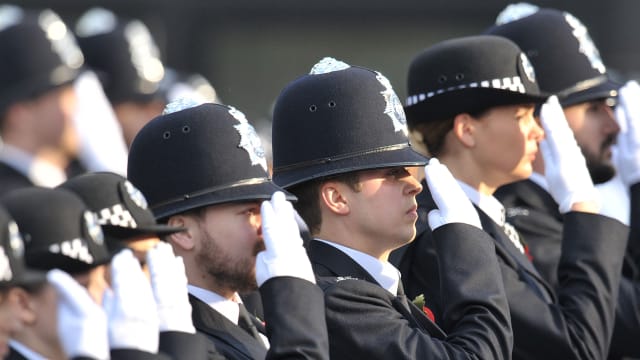 Nearly half of people in England and Wales have not seen a uniformed police or community support officer on foot in their area in the last year, research suggests.

A large-scale survey indicates that the bobby on the beat is a rare sight for a rising percentage of the population.

While more than four-fifths of participants felt it was important to have a regular uniformed police presence, only 17% believed they had this locally.

The percentage saying they had not seen uniformed personnel in a vehicle in the past year was lower, at 12%.

The survey of 12,662 people was carried out by Ipsos MORI for HM Inspectorate of Constabulary and Fire & Rescue Services (HMICFRS) to gauge perceptions of crime, safety and local policing.

The inspectorate has previously raised concerns over the impacts of an "erosion" of neighbourhood policing.

Andy Fittes, General Secretary of the Police Federation of England and Wales, said: "The findings of the survey are disappointing but come as no surprise.

"There is no getting away from the fact that we simply do not have the resources to patrol as we once would have done.

"Police chiefs are having to make tough choices and to prioritise things like terrorism and public order events and ensure that the critical incidents such as responding to 999 calls are dealt with.

"All these have to take priority over walking the beat and carrying out the sort of proactive policing that the public wants."

But Richard Garside, Director of the Centre for Crime and Justice Studies, said cuts to police officer numbers have resulted in a reduction in unnecessary patrols.

He said: "Mere visibility is not a useful measure of effective and accountable policing."

The research also found a marked increase in confidence in the police to provide protection during a terrorist attack.

A Home Office spokesman said: "Effective local policing has always been about more than just officers' visibility - never more so than now, with crime increasingly taking place behind closed doors and online."