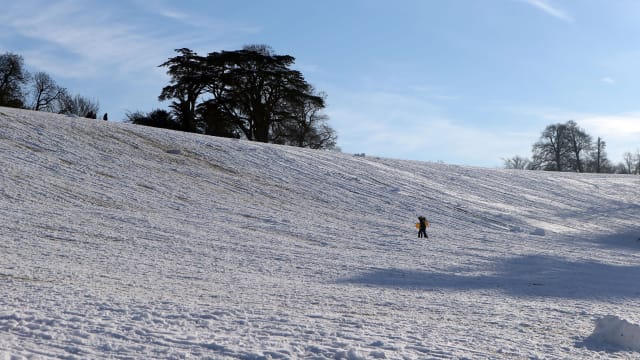 Despite forecasts of a balmy festive season, some people are still dreaming of a white Christmas with a surge of bets placed on snow on the big day.

Bookmaker Coral has seen an increase in customers having a flutter on a flurry of snow in 13 of the UK's biggest cities.

Aberdeen has the shortest odds at 2-1 for snowfall, while Birmingham and Manchester are both on 6-1 with London trailing on 8-1.

A spokeswoman for the Met Office was less optimistic, saying the chances of snowfall in London were "virtually nil".

The outlook is better elsewhere, with rural Scotland having the highest chance of living the white Christmas dream.

The spokeswoman said: "It's quite likely that parts of Scotland, particularly the southern uplands and possibly the central hills above a couple of hundred metres or so, will see some snow.

"It is most likely to fall through the afternoon and in to the evening over Christmas Day.

"We will possibly see some snow in the hills and mountains of Wales and the north of England."

For years, Christmas was declared "white" if a single flake of snow was observed by a professional meteorologist falling on the roof of the London Weather Centre.

The Met Office has now broadened its definition to extend to other parts of the country, although the snow still has to be recorded by a professional.

Coral spokesman Harry Aitkenhead said: "It may be punters betting with their hearts rather than their heads but over the last few months we have taken a record number of bets on this year being a white Christmas.

"We will be paying out long into Boxing Day if snow does fall."

The temperature predictions for London's major cities are mild, with some cities forecast to be warmer than Madrid and Istanbul.

London and Birmingham are set to reach a high of 10C, with Manchester topping out at 11C, and even Aberdeen reaching a mild 6C.

Istanbul is currently just 8C while Madrid is sitting at 9C.

The Met Office has forecast a mild and breezy Christmas Day across most of the UK, with patchy drizzle over the hills and coasts.