London Zoo reopens after aardvark and meerkats die in fire 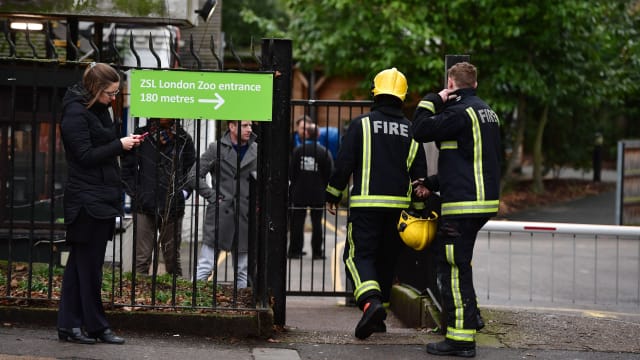 London Zoo has reopened after several animals died when a fire broke out at the world-famous attraction.

The zoo confirmed that an aardvark died during the blaze and four meerkats, who remain unaccounted for, are also presumed dead.

An initial post-mortem examination of nine-year-old Misha the aardvark showed she most likely died from smoke inhalation whilst sleeping.

The fire broke out at approximately 6am on Saturday in the Animal Adventure section of the zoo, destroying the cafe, shop and around half the adjacent petting zoo, London Fire Brigade said.

The zoo was closed for the day, leaving families who had tickets for the Meet Santa experience unable to attend.

On Twitter the zoo told visitors who had booked to enter Santa's grotto that they would be offered a refund.

Dominic Jermey, director general for the Zoological Society of London, told the Press Association on Saturday: "We are absolutely devastated that Misha has passed away.

"We had our vet team on site immediately but sadly there was nothing that they could do for Misha."

A zoo spokeswoman confirmed that the four meerkats, who are unaccounted for as a result of limited access to the site, were presumed dead.

Keepers who live on site were on the scene immediately after the fire broke out and started moving animals to safety.

Some staff were treated for smoke inhalation and shock at the scene, and one firefighter was taken to hospital as a precaution after suffering a minor wrist injury.

More than 70 firefighters attended the incident, which was brought under control by 9.16am.

He told the Press Association: "Our specialist fire investigation teams will be searching through the debris and looking and seeing if they can establish a likely cause for the fire."