Tourists are travelling from all over the world to visit a country village where rows of houses are covered in Christmas lights.

Thousands of people come in their droves to see the display in Westfield with some visiting from as far as America, Canada and even Australia to admire the hundreds of lights and festive figurines, organisers said. 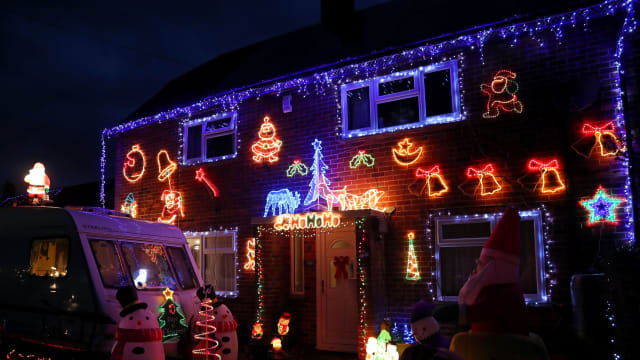 The East Sussex village has a population of around 2,750 people and has managed to raise more than £66,000 for St Michael's Hospice in nearby Hastings by lighting up each year.

Ken Munday, one of the original participators, has been decorating his house since 1976. But he noticed a trend growing in 2005 when scores of houses started to join in. Over the last 12 years, it has become a firm tradition.

Mr Munday still stands outside his house in Churchfield - the main thoroughfare - every night in December until Christmas Eve to welcome families and collect donations.

The 87-year-old, who grew up in the village and has lived there all his life, said: "We are starting to get a lot of visitors from abroad. There was even an article about us in a German newspaper. We seem to have become famous. We've had people from America, Canada, Australia. They think it's wonderful.

"It's amazing to see so many people. The lights go on about 4.30pm each night until 10pm and lots and lots of cars arrive and crowds of people are walking along the pavement. Last Christmas Eve, we had about 3,000 people in one evening.

"It is such a lovely village, everyone knows each other and they get on well. It's just a good community and lots more people are wanting to take part."

He said between the residents they probably spend hundreds of pounds on electricity throughout the season and more on the thousands of Christmas lights. But he said everyone covers the costs themselves so all the money raised can be donated straight to charity.

He is helped by Richard Millward, whose late father Frederick, was one of the first people to take part.

He now organises the collection for the hospice and decorates the outside of the house he grew up in with features including snowmen and Santa figurines which have been put out on display for 40 years.

The 70-year-old said: "My father died this summer, he was 93. It's nice to be able to carry this on in his memory.

"We've had so many people visit and they are astounded with the display. This has meant we've raised a huge amount for charity, everybody relates to the hospice. It gets bigger every year and people put out more decorations each time."