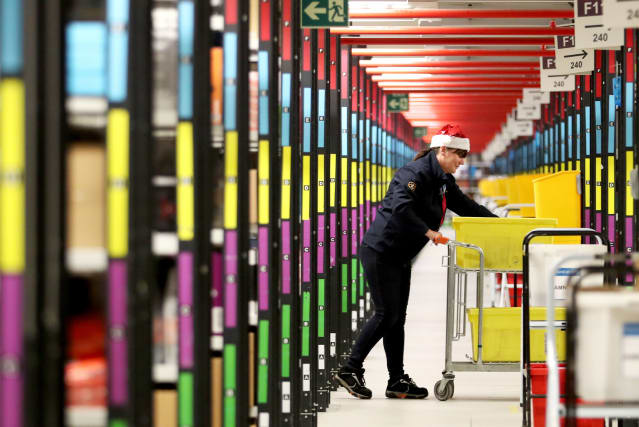 Delivery drivers will be working late on Christmas Eve as retailers allow shoppers to place last orders well into the evening.

Amazon and Argos are both offering home delivery for those who have left their shopping to the very final hours.

Argos customers can order items eligible for its Fast Track delivery until 1pm on Christmas Eve for delivery in time for Christmas Day, although its usual 7pm to 10pm evening delivery slot will not be available.

Amazon is offering same-day evening deliveries on December 24 in Greater London and 13 other cities on orders made as late as noon, although it warns availability is limited.

But members of Amazon's Prime subscription service can order selected items as late as 9.45pm on Christmas Eve for a two-hour delivery in Greater London and eight other cities, although the retailer warns anyone relying on leaving their shopping until then that dates and times are subject to availability and "may change due to circumstances outside of our reasonable control".

John Lewis has announced it is extending its Click & Collect order cut off by 24 hours to 8pm on December 23 to allow customers to collect their parcels in shops until they close on Christmas Eve.

Currys PC World, Asos, Very and Littlewoods are also accepting orders until late on December 23 for delivery in time for Christmas.

The deadlines loom as new Ofcom research shows that UK consumers spend more than double the amount on internet shopping than consumers in any other country in its international comparison, with one in three (33%) using same day delivery services.

John Lewis operations director Dino Rocos said: "With Christmas Eve falling on a Sunday this year we're expecting to see a gifting surge right up until the last minute.

"Our decision to extend Click & Collect cut off times this Christmas means that for our customers the stress of Christmas shopping is a thing of the past, allowing them to spend more time with their families and less time chasing parcels at this important time of year."

Ofcom's study comparing the UK with 16 other countries from across Europe and the rest of the world found that we are a nation of "panicky purchasers" who are eager to receive orders as quickly as possible.

UK shoppers spend more than double on online shopping - £2,175 per head - than any other country in the research, the study found.

Almost two thirds (62%) said they had used next day delivery services to receive products bought online, ahead of the next country, Spain, on 53%.

Some 60% of UK consumers have used click and collect services, more than any other country included in the research.

Ian Macrae, director of market intelligence at Ofcom, said: "Internet shopping is big business, with the average amount spent online in the UK more than double that of other countries.

"Faster, more reliable internet is helping UK shoppers find and buy the things they need. And people now expect to get their purchases quicker than ever, with retailers and parcel firms developing ever more innovative ways to get their products to customers."