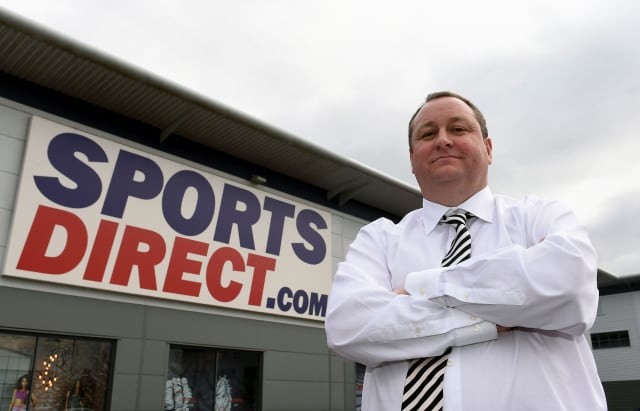 Mike Ashley's Sports Direct has seen half year profits dented as the retailer flagged that sales in the UK fell following store closures, reduced online promotions and as a result of Brexit hit pound.

The retailer said that statutory pre-tax profits plunged 67.3% to £45.8 million in the 26 weeks to October 29, which Mr Ashley put down to "fair value adjustments and transitional factors such as the disposal of assets".

Last year's profits were also flattered by the sale of a chunk of shares in rival JD Sports.

UK retail sales fell by 1.4%, mainly due to reduced online promotional activity, store closures and the weak pound pushing prices up for consumers and the company itself.

The tycoon, who also owns Newcastle United, is attempting to reposition the store estate, which he claimed is delivering "spectacular" results.

He said: "Our high street elevation strategy is currently delivering spectacular trading performance within our flagship stores. We intend to open between 10 and 20 new flagship stores next year.

The firm said that it expects underlying earnings growth for the full year to come within its forecast range of 5% to 15%.

Last year the retailer was hit after failing to hedge against the fall in the value of the pound in the immediate aftermath of the EU referendum, leading to a collapse in profits.

It said in its latest trading update that it signed long-term forward hedging contracts in October.

The results come amid a seemingly never-ending string of controversies for the firm , which has this year seen a slapstick legal battle take place between Mr Ashely and a former confidant, the investment banker Jeffrey Blue.

While Mr Ashley emerged victorious, lurid details in the case - which included the Sports Direct chief apparently vomiting into a fireplace after an alcohol-fuelled  senior management meeting - have done little to enhance the tycoon's reputation.

And on Wednesday, shareholders in Sports Direct voted overwhelmingly to oppose Mr Ashley's attempt to hand his brother and former IT director an £11 million back payment.

In September, Sports Direct's under-fire chairman Keith Hellawell escaped a full-blown investor revolt after the majority of independent shareholders backed his re-election despite widespread criticism of his stewardship.

Last year Mr Ashley was hauled before MPs to be grilled over working conditions and shortly after the company host a tumultuous "open day" at its headquarters.