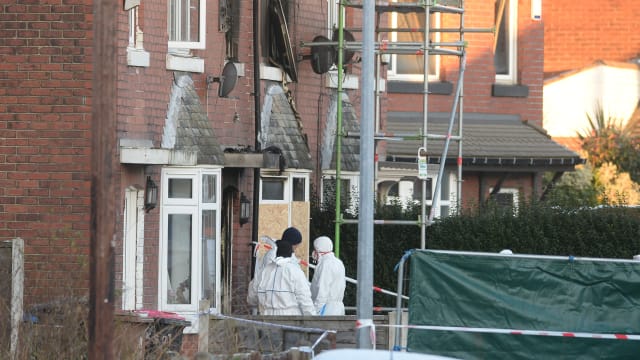 Five people are being questioned over the suspected murder of three children who died after a house fire.

Demi Pearson, 14, was pronounced dead at the scene in Worsley, Greater Manchester, while her eight-year-old brother Brandon and seven-year-old sister Lacie later died in hospital.

The children's 35-year-old mother, Michelle Pearson, is in a serious condition in hospital while a fourth sibling, three-year-old Lia, is critically ill.

Greater Manchester Police said three men, aged 23, 20 and 18, and a 20-year-old woman have been arrested on suspicion of murder.

A 24-year-old man is also being questioned in custody on suspicion of assisting an offender.

Emergency services were called to the mid-terraced house in Jackson Street just before 5am on Monday.

Two 16-year-old boys who were also in the house freed themselves before fire crews arrived and put out the blaze.

Police confirmed there had been "earlier incidents" at the address and said the force had made a self-referral to the Independent Police Complaints Commission.

Chief Superintendent Wayne Miller, of Greater Manchester Police, said: "In what is such a heart-breaking set of circumstances, we have been doing our very best to support the family in every way that we can and carry out our inquiries quickly and sensitively.

"We are still appealing for people who witnessed the fire itself or the events leading up to it to get in contact with us and tell us what they know."

Earlier, Mr Miller urged an unnamed suspect to hand himself in as he told reporters: "He knows who he is and he should give himself up.

"This will devastate this family forever and words cannot describe what they are going through. We need the public's help to find the answers the family deserve."

Demi was a pupil at Harrop Fold School in Salford, which featured in the Channel 4 documentary Educating Greater Manchester.

We are devasted at the tragic loss of life today in our community. Our thoughts and prayers are with the family involved.

Head teacher Drew Povey said: "We are devastated at the tragic loss of life today in our community. Our thoughts and prayers are with the family involved."

A large police presence remained at the scene throughout the day as both ends of Jackson Street were cordoned off, with one end blocked by large steel barriers.

Tearful locals stood at the end of the cordons and consoled each other with embraces.

One woman, who did not wish to be named, said she knew the mother of the family.

She said: "I have known Michelle for years. The family have lived here for a long time. We are all just in shock.

"There has been trouble round here before but it's more wannabe gangsters, teenage stuff."