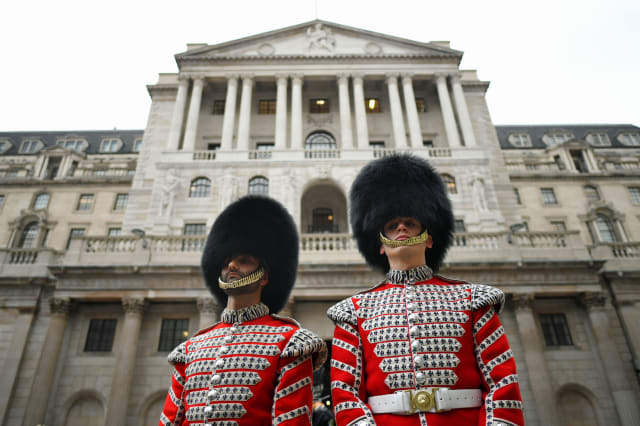 Policymakers are expected to keep interest rates on hold next week after November's milestone hike amid increasing speculation it was a "one and done" move.

The Bank of England voted 7-2 to increase rates for the first time in a decade last month, with a rise from 0.25% to 0.5% as it sought to cool surging inflation.

It was widely expected after repeated hints from governor Mark Carney and other key rate-setters, while the Bank also said two more rate hikes were likely over the next three years to return inflation back to its 2% target, which could see rates hit 1% by the end of 2020.

But many experts said they believed rates will remain at 0.5% for at least another year.

Ryan Djajasaputra, economist at Investec, said: "(The) Bank of England is all but certain to hold fire at its policy meeting on Thursday;.

"We will be looking for any clues over the timing of any future policy tightening in the minutes."

The latest meeting comes amid mixed reports from the economy, with activity in Britain's manufacturing sector jumping to its highest level in more than four years while service sector growth has eased back.

This may come as a welcome rebalancing of the economy, but shows a worrying fall-out from Brexit-fuelled inflation on the UK's biggest contributor to gross domestic product.

Services firms increased prices last month at the fastest pace for nearly a decade in the face of soaring costs, which suggests that inflation may well rise above the current 3%.

There was also gloom over the economy on Budget Day after Britain's fiscal watchdog, the Office for Budget Responsibility, slashed growth predictions for the next five years.

It also pencilled in lower government borrowing this year and next, but hiked its long-term forecasts.

Howard Archer chief economic adviser at the EY ITEM Club, said the Bank "will not be happy" with the price rises revealed in the service sector data.

He added: "Nevertheless, having only raised interest rates from 0.25% to 0.50% in November, the Bank of England will undoubtedly sit tight at the December MPC meeting."

He is forecasting growth to remain at 0.4% in the fourth quarter - unchanged from the third quarter - but added that "much will depend on how well the services sector performs and how much consumers spend over the crucial Christmas period".

Chris Williamson, chief business economist at IHS Markit, said the upbeat figures from the other sectors of the economy last month should help offset the services slowdown.

He said figures from the main sectors of the economy point to a quarterly rate of 0.45% growth in the closing months of 2017.