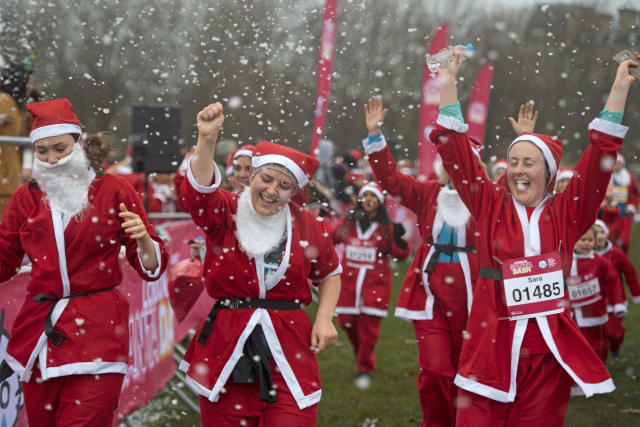 Hundreds of patients, families, hospital staff and even dogs suited and booted up to tackle the 5k and 10k courses on Clapham Common, south-west London, on a chilly and grey Sunday morning.

Sounding the starting klaxon was 11-year-old Arun Corcoran, who has been a Gosh patient since he was six weeks old and was taking part in the Santa Dash with his family for the third time.

Arun, from Wokingham, Berkshire, who was born with only one kidney and will need a transplant at some point in the next decade, said he was "very cold" but looking forward to the race.

His kidney condition has not stopped him from becoming a Team Gym British gymnast, as well as throwing himself into charity runs.

His school held a fair to raise money for Gosh and Arun's sponsorship after hearing about the Santa Dash.

Arun's father, Simon Corcoran, thanked Gosh staff for all their support and said thousands of running Santas were "an amazing sight".

Despite the downpour, the jolly joggers kept upbeat as they made their way round the sodden grass course.

A snow cannon sent snowflakes flurrying through the air as the now-weary Santas crossed the finish line to cheers and applause, their red hats askew.

Also taking part was eight-year-old Indigo, from south London, whose brain tumour was removed by Gosh three years ago.

Her condition meant she had to use a wheelchair, but she has since managed to learn to walk, ride a bike, run, dance, play piano and do gymnastics.

She said she was nervous but "really excited" to be taking part, adding that her recovery had taken a lot of determination.

Her father, Robbie, said: "She's done really, really well, it's been a very long journey and with amazing support of Gosh.

"We never thought we'd see a day like today but it's been step by step and now its fantastic, and Indy herself asked to join and we of course said we'd love to all get involved and we've now got a group of about 12 of us running today."

Tim Johnson, chief executive of the Gosh children's charity, said there were a similar number of runners to last year and they were hoping to raise around £250,000.

He said: "People turn their thoughts to Christmas at the beginning of December so the chance to come and dress up as Santa and raise some money for the hospital at the same time just really seems to appeal to people."

The money raised on Sunday will go towards the charity's play service, he said.