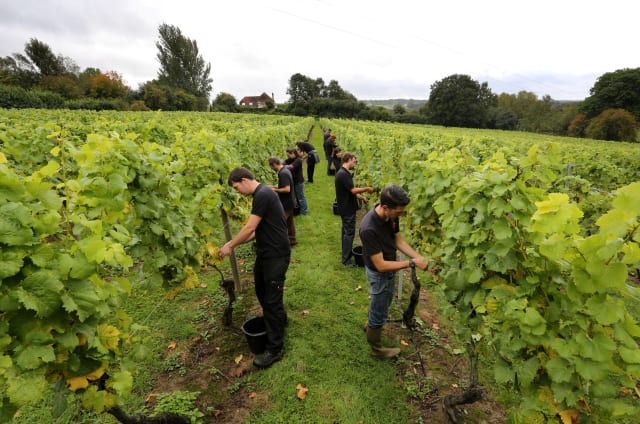 The chief executive of Chapel Down, an official wine supplier to 10 Downing Street, has warned that Britons will "starve" if the door is closed to foreign fruit pickers after Brexit.

England's biggest winemaker, based in Kent, relies on EU workers to pick grapes for its drinks, which also include beer, cider and gin.

In comments that are likely to cause embarrassment for Prime Minister Theresa May, Chapel Down chief executive Frazer Thompson told the Press Association: "The biggest potential impact (of Brexit) is on agricultural labour.

"Kent has had Eastern Europeans picking fruit in recent years, but we'll all starve if the labour issue is not sorted after Brexit."

Mr Thompson's comments come as tonnes of fruit have been left to rot in farms across the country - including in Kent, Scotland and Herefordshire - because Brexit has made it harder to recruit European pickers.

According to the National Farmers' Union, the horticulture industry had a 29% shortfall of seasonal workers in September.

Mrs May has continuously said she would like to see net migration fall to the "tens of thousands", despite warnings over the economic cost.

The Chapel Down chief added: "We want a resolution to allow us to have freedom of movement for labour to pick the fruit, this is something that affects all fruit farmers across the south east of England.

"I'm hoping it will be sorted out and I hope they won't close the doors, as if there's no-one to pick the fruit, we'll have to import everything."

However, doubts remain over Britain's ability to import or export anything freely with the EU and the rest of the world as the Conservatives have yet to begin trade talks with the bloc or ink any deals with non-EU countries.

The chief executive of Sainsbury's has also previously warned that fresh food could be left rotting at the British border if strict customs controls for EU goods are put in place after Brexit.

Mr Thompson's voice is the latest to join a chorus of business leaders and industry bodies that have issued stark warnings on how Brexit is affecting or will affect numerous sectors, including agriculture, aerospace, manufacturing, retail, airlines, construction and financial services.

A Home Office spokeswoman said: "We remain committed to bringing down net migration to sustainable levels.

"After we leave the EU, we will put in place an immigration system which works in the best interests of the whole of the UK.

"Crucial to the development of this new immigration system will be the views from a range of businesses, including those in agriculture and the food and drink industries.

"We have also asked the Migration Advisory Committee to assess the economic and social impact of EU citizens in the UK.

"We are carefully considering the options for the future immigration system and will set out our plans shortly.

"We have already been clear there will be an implementation period after we leave the EU to avoid a cliff edge for businesses and that EU citizens already working in the UK will be able to apply for settled status so they can stay."