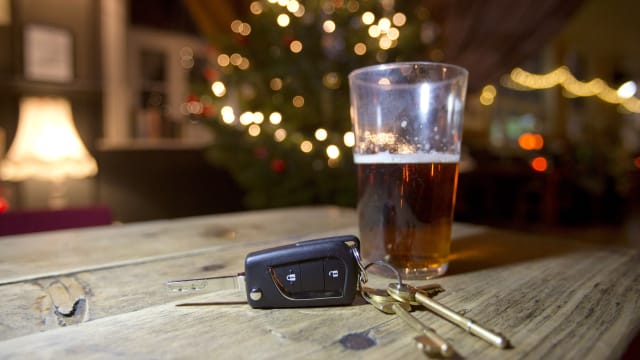 Christmas merriment is increasingly tempting motorists to drink-drive, a survey has found, with one in six feeling added pressure to enjoy "one for the road".

A study of more than 18,500 drivers by the AA discovered that 17% report a greater expectation to drink before they get behind the wheel during the festive period.

It marks a significant spike since 2011, when only 5% complained of extra pressure to consume alcohol before driving at Christmas.

Chief among the suspects demanding people have a pre-journey tipple are work colleagues, who 42% identified as the pushiest, and friends, named by 41% as the worst offenders.

The findings come as police launch a crackdown on drink and drug-driving as Christmas approaches.

From Friday, forces across England and Wales will run "intelligence-led" operations to target motorists who get behind the wheel under the influence.

The initiative will run from December 1 to New Year's Day inclusive.

During last year's Christmas campaign, police stopped more than 100,000 vehicles, with 5,698 breath tests that were positive, failed or refused.

"Yet thousands of people still get behind the wheel after drinking or taking drugs - so this year we are supporting forces who want to tell the personal stories of lives lost and families torn apart.

"Our recent operations have shown higher rates of detection for drugs and alcohol than in recent years, which means the scale of the problem is still a real concern.

"We remain committed to enforcing the law, which says that if you drive while under the influence of alcohol or drugs you can face an unlimited fine, disqualification from driving and more than a decade in prison.

"Even a small amount of alcohol or drugs in your system can affect your ability to drive safely - don't let your friends and family pay the price."

The push to stamp out seasonal drink-driving is backed by the AA, which is this year advising drivers to say "no thank you" when asked if they want a drink.

Edmund King, AA president, said: "It is worrying that people are still encouraging others to take such risks. An almost three-and-a-half times increase in the number of drivers under pressure to drink and drive is not a good sign.

"A cocktail of peer pressure, bravado and a fear of missing out makes it harder for young drivers to say no.

"So if a friend or work colleague offers you a drink when you're driving, say no thank you.

Releasing young people could be best way out of lockdown, experts suggest