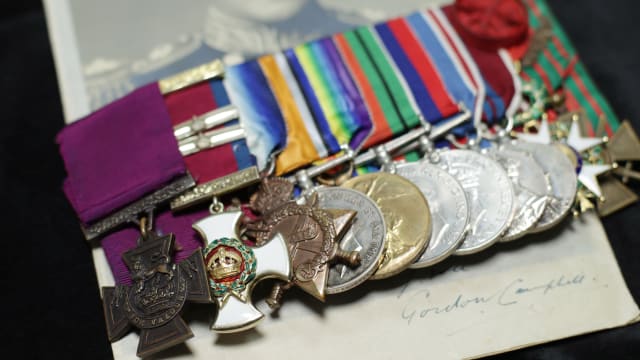 The ancestor of a war hero has bought his great-uncle's Victoria Cross and other medals for £840,000 so they can be shared with the public.

Baron Lorne Thyssen-Bornemisza paid a world record price for the collection at auction 100 years after the VC was awarded to Vice Admiral Gordon Campbell.

Campbell was captain of the "Q-Ship" Farnborough and successfully destroyed a German submarine U.83 on February 17 1917.

The collection, which set a new world auction record for a VC and any group of British medals, will now stay in the UK on public display.

Lorne Thyssen-Bornemisza said: "These medals have enormous historic value for the UK, as well as personal value to me and my family.

"Behind every medal is a human story and an example to generations to come.

"Gordon Campbell was an old-fashioned hero who was recognised for conspicuous gallantry, consummate coolness, and skill in his command of 'Q' Mystery Ships, decoys for German U boats.

"I am offering the medals for display in a UK museum, where I hope as many people as possible will have the opportunity to learn about Gordon and his incredible story."

The medals were consigned for sale by The Fellowship of St John (UK) Trust Association and sold at London auctioneers in Mayfair on Thursday.

Proceeds from the sale will support a number of projects the Anglican charity is involved with, including an orphanage in Zimbabwe, university scholarships in South Africa, hurricane relief in the West Indies and various charities in the UK.

James Morton, of specialist medal auctioneers Morton and Eden, said: "The absolutely outstanding price achieved for this VC group reflects how extremely important it is in terms of British naval and military history.

"It has been a great privilege for Morton and Eden to offer such a fine and historic group and especially so as the proceeds will be used to benefit people in need all over the world."