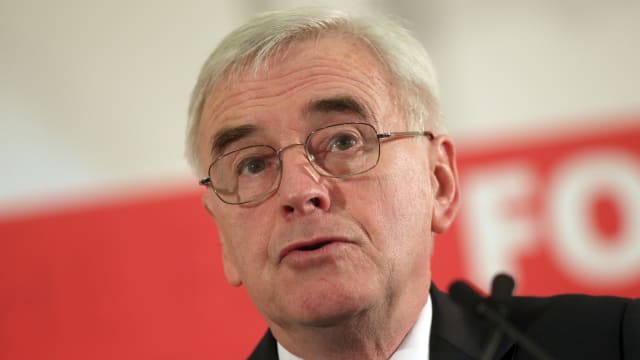 Theresa May's Government is "on a slow retreat to oblivion" and has "no objectives, no mission", shadow chancellor John McDonnell has said ahead of Wednesday's Budget.

In an interview with The Observer, Mr McDonnell accused the Government of "alienating the ordinary working-class people" due to the impact of austerity.

And he warned that there is nothing Philip Hammond can do this week to ease divisions within the Conservative Party.

Mr McDonnell told the paper: "If Hammond uses the Budget to try to buy off the individual factions in the Tory party, it'll be chaos. And if he doesn't, they will remain just as split as they are now.

"They've got no mission, no objectives and I think they realise. What is the point of them being there?"

He added: "I think they're disintegrating, on a slow retreat to oblivion, but I never underestimate them and their ability to cling on."

Writing in the Sunday Mirror, Mr McDonnell said the Budget needed to show a "genuine, decisive change of course" and not "empty promises".

He said the Chancellor had an opportunity to address the consequences of his austerity programme.

Mr McDonnell wrote: "The country has to see an 'emergency Budget' to alleviate the emergency taking place right now in our public services, and for the millions of working households in our country struggling to get by... it needs a complete break with past failures."

Earlier this week, Mr McDonnell said a Labour government would spend an extra £17 billion a year on the NHS, education and local government while ending the public sector pay cap.

Setting out Labour's demands for the Budget, he has also urged a large-scale public house-building programme, funding for infrastructure and the pausing and fixing of Universal Credit.

Mr McDonnell added: "We need a Budget that improves the lives of the many, and not one that just rewards a wealthy few."