Charles reflects on 'heartbreaking' devastation left by hurricanes in Caribbean 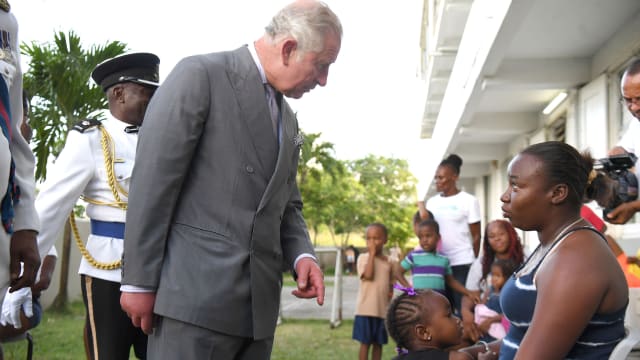 The Prince of Wales has described how the damage to the environment, loss of life and general destruction caused by the hurricanes which ripped through the Caribbean was "utterly heartbreaking".

Charles, speaking after meeting families made homeless by Hurricane Irma and organisations that responded to the disaster, said it was "painful beyond words to see the devastation".

The heir to the throne's comments came during the first day of his three-day visit to the Caribbean - a personal mission to see for himself the damage wreaked by hurricanes Irma and Maria.

At a Friday night reception in the Antiguan capital of St John's, attended by the governor-general of Antigua and Barbuda, Sir Rodney Williams, and the country's prime minister, Gaston Browne, Charles said: "And so it was painful beyond words to see the devastation that was so cruelly wrought across the Caribbean by Hurricanes Irma and Maria in those few, terrible weeks in September.

"In Barbuda as well as in the British Overseas Territories of Anguilla, Turks and Caicos, and the British Virgin Islands; in Dominica, and in Puerto Rico, Saint Martin and other islands too, the loss of life and property and the damage to the natural environment have been utterly heartbreaking."

Charles' visit, which began on Friday, started as the UK Government reaffirmed its commitment to "stand by" the islands devastated by the natural disasters and announced a further £15 million in support.

The new International Development Secretary Penny Mordaunt, who is joining the heir to the throne during his brief Caribbean tour, launched the financial package - £12 million for Dominica and £3 million for Antigua and Barbuda.

With the £15 million initiative - plus £15 million recently allocated for the affected Overseas Territories of Anguilla, the British Virgin Islands (BVI) and Turks and Caicos - the UK Government has now committed £92 million to help recovery and long-term reconstruction in the region.

The prince was making his first official visit to the Commonwealth nation whose island of Antigua escaped the worst of Hurricane Irma's high winds and lashing rain, but neighbouring Barbuda bore the brunt of its destructive powers as did the BVI.

During Saturday Charles will visit Barbuda, where most of the buildings were destroyed, and the BVI, which suffered major damage to its infrastructure, homes and businesses.

On BVI's main island of Tortola the prince will meet staff from British Virgin Islands Red Cross, who are supporting families made homeless by the hurricane, and attend a community reception at Government House where entrepreneur and BVI resident Sir Richard Branson will be among the guests.

The prince also said in his speech: "As we look towards the Commonwealth Heads of Government Meeting in London next April, the recent events in the Caribbean have helped to underline the importance of the Commonwealth as a family, whose members care deeply for each other in times of need.

"This is why it was so important to me that I should come to the Caribbean this weekend - to show my support (however inadequate that may be) for those who have suffered so greatly; and to thank all those who have worked so tirelessly and courageously to help and assist them."