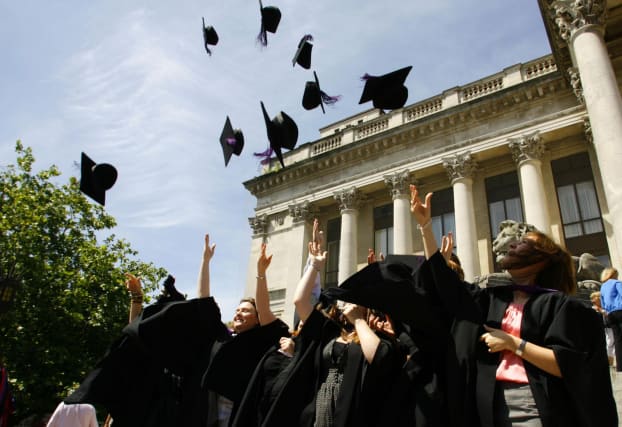 Students from the richest homes should pay £12,250 a year in tuition fees, while going to university should cost the poorest nothing, it has been suggested.

A means-tested system could cut average student debt by a third, with those from the most disadvantaged families benefiting the most, according to a new study published by the Sutton Trust.

The social mobility charity also called for grants designed to help less well-off students with living costs to be reintroduced, warning that it is an "absolute scandal" that the poorest are graduating with the highest levels of debt.

English and EU students at universities in England now pay up to £9,250 a year in fees, and are eligible for government loans to cover the cost.

Last month, the Prime Minister announced that in future, graduates will not have to start repaying these loans until they are earning at least £25,000 - up from the current £21,000 threshold.

The move came amid growing debate about university funding - an issue which has been in the spotlight since the general election when Labour made a high-profile promise to scrap tuition fees. The pledge was credited with winning the party support among young voters.

An analysis conducted by London Economics for the Sutton Trust concludes that raising the repayment threshold will mean that 45% of student debt will never be paid back, while around four fifths of graduates will not repay their loans in full. The debt is written off after 30 years.

Currently, students graduate with an average debt of £46,000, the report says.

A means-tested fees system, and bringing back maintenance grants, would cut overall average student debt in half to £23,300, and reduce it by 75% for the poorest students to an average of £12,700.

Sir Peter Lampl, Sutton Trust chairman, said: "It's an absolute scandal that the poorest students graduate with the highest debt. A typical graduate will leave university with whopping debts of £46,000 while young people from households in the lowest 40% of earners will graduate with debts of nearly £52,000. These debt levels are almost double those of American university graduates.

Sarah Stevens, head of policy at the Russell Group which represents 24 leading universities, said: "It is right that the Government continues to consider how the fees and funding system can be optimised. This report, which argues for the means-testing of fees and maintenance, is an important contribution to the ongoing debate.

"However, we should be mindful of the drawbacks of any system that depended on significant upfront funding from the Treasury given the many other demands on the public purse."

A Department for Education spokeswoman said: "Students from the lowest-income households who started their courses this year have access to the largest ever amounts of cash-in-hand support for their living costs.

"This Government has increased means-tested maintenance support for these students by over 10% in 2016/17 compared with the previous grants and loans package, with a further 2.8% increase in 2017/18, reiterating our commitment that all young people, regardless of background, can go to university."