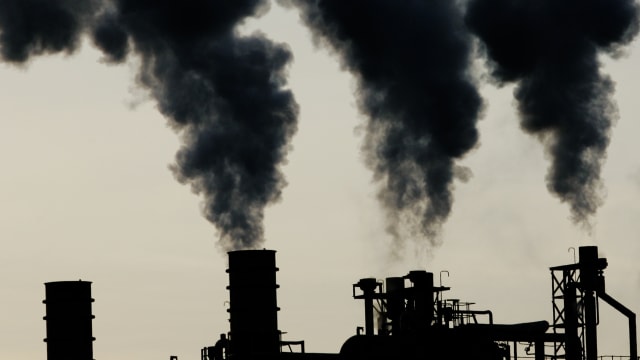 Global carbon emissions have risen in 2017 to record highs, scientists said, undermining hopes the world had reached a peak in pollution which drives climate change.

The 2% rise in carbon dioxide coming from fossil fuels and industry this year follows three years in which the world saw little to no growth in emissions, opening up the possibility that they were peaking and could start to decline.

The delay in that moment, signalled by carbon emissions rising again this year, has prompted scientists to warn that time is running out on the ability to keep temperature rises to levels that could avoid dangerous climate change.

New data revealed by researchers at the University of East Anglia (UEA) and the Global Carbon Project found emissions from all human activities are set to reach 41 billion tonnes by the end of 2017, with a record 37 billion tonnes from fossil fuels and industry.

This year's rise is largely due to increased growth in emissions from China, which are projected to grow 3.5% as the country burns more coal in the face of industrial growth and low hydropower output due to low rainfall.

US and EU emissions are expected to decline by 0.4% and 0.2% respectively, smaller drops than in the previous decade.

"Global carbon dioxide (CO2) emissions appear to be going up strongly once again after a three- year stable period.

"With global CO2 emissions from human activities estimated at 41 billion tonnes for 2017, time is running out on our ability to keep warming well below 2C, let alone 1.5C."

The data comes as countries meet for the latest round of United Nations climate talks in Bonn, Germany, which are discussing the implementation of the Paris Agreement, the world's first comprehensive treaty on climate change.

The agreement, secured in December 2015, commits countries to holding global temperature rises to "well below" 2C above pre-industrial levels, which will require greenhouse gas emissions to be cut to net zero by the second half of the century.

It also commits to strive to curb increases to 1.5C, which vulnerable countries say is necessary to ensure their survival.

Glen Peters, a research director at CICERO Centre for International Climate Research in Oslo who led one of the studies, warned: "Global commitments made in Paris in 2015 to reduce emissions are still not being matched by actions.

"It is far too early to proclaim that we have turned a corner and started the journey towards zero emissions."

Despite growth in 2017, global emissions are unlikely to return to the high 3% annual growth rates of the 2000s, and are more likely to plateau or have slightly positive growth.

The rise in emissions was less steep than the increase in economic output, and carbon dioxide fell despite growing economic activity in 22 countries representing 20% of all emissions, the figures showed.

Globally renewable energy has also increased rapidly at 14% a year over the last five years, although from a very low base.