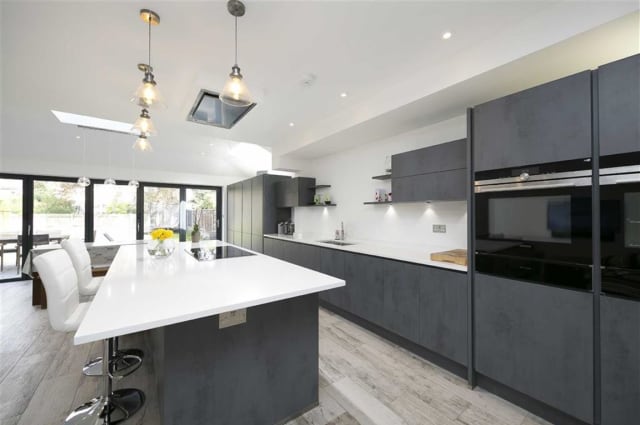 Ask any house-hunter what's top of their wish list, and the chances are it'll be a big family kitchen.

These days, the kitchen is very much the heart of the home: a place to hang out and relax with the family, rather than just somewhere to churn out meals.

Unfortunately, though, nobody told the house-builders of the past that this change was afoot - so unless you're lucky enough to find a big old farmhouse or a brand-new build, there's a fair chance that your dream home will be marred by a kitchen that just doesn't cut the mustard.

The answer, of course, is to extend - but this is always a big expense and upheaval. How much better, then, to buy a place where someone else has done all the work?

We look at seven houses with lovely kitchen extensions. 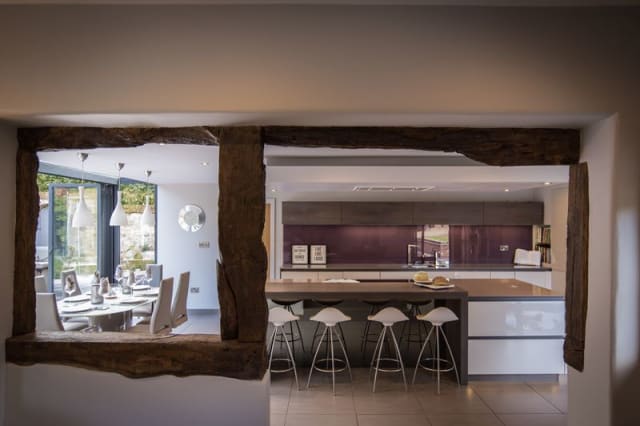 The stunning extension to this barn conversion is perfectly in keeping with the original brick-and-timber building and was added in 2015. The lovely kitchen inside, though, is as modern as it gets, with gleaming white units aqnd bi-fold doors onto an inner courtyard. The rest of the house has also been remodelled, and now boasts a stunning curved staircase and glazed feature wall in the impressive hall. If the five bedrooms and four receptions aren't enough for you, there's a stable block and garage in the 1.5 acre grounds. Chadwick Barns costs £3m through agents Mr & Mrs Clarke, 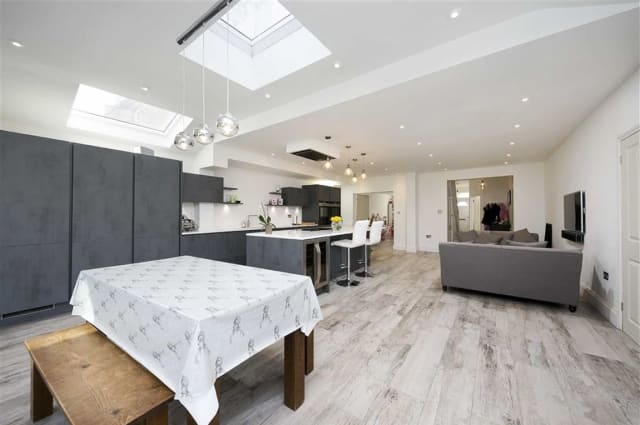 This four-bedroom detached house has been recently refurbished and extrended, and now boasts a stunning 29-by-9-foot kitchen/family room that leads onto the garden via full-width powdered aluminium bi-fold doors. There's a custom made In-Toto kitchen, including a large island with quartz work top and built-in Siemens induction hob. There are two other, more conventionally sized, rooms downstairs. The house is priced at £1,495,000 through agent Milestone Residential. 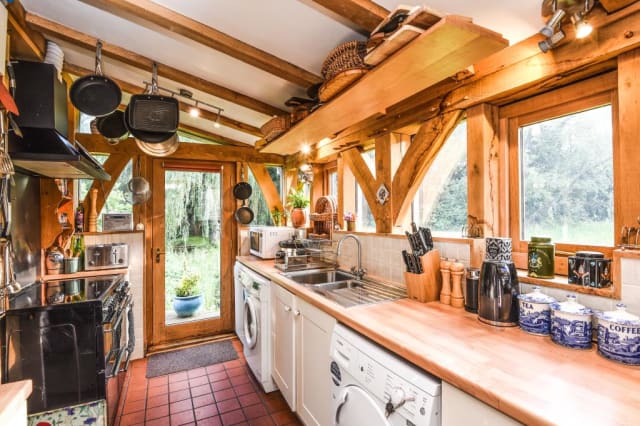 The kitchen extension to this three-bedroom cottage is narrow - 21 feet by just seven and a half - but is perfectly in keeping, having been built in 2010 from traditional green oak. With underfloor heating and a range cooker, it looks out over a nearby stream and surrounding countryside. The house's three bedrooms are accessed by a spiral staircase, and original features include fireplaces and wooden floors. Agents Chancellors are looking for offers over £300,000. 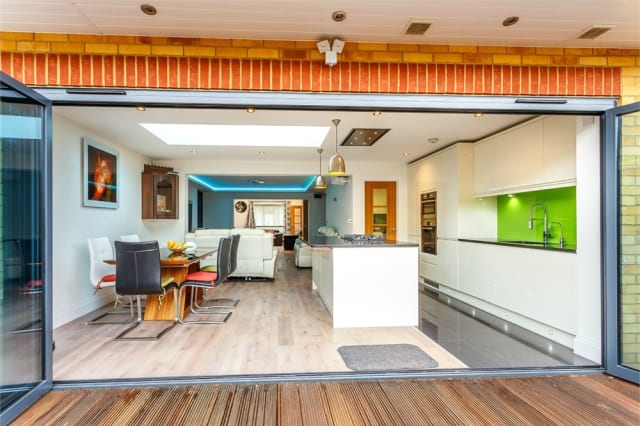 The 18-foot kitchen extension of this three-bedroom house leads on from an open-plan ground floor. With Neff and Bosch appliances throughout, it has a bold modern feel, and opens seamlessly onto the garden through bi-fold doors. There's a separate utility room to keep things tidy. And the rest of the house is equally swish, with two lovely bathrooms, Cat6 cabling and LED lighting. The house costs £595,950 through Hamilton Chess. 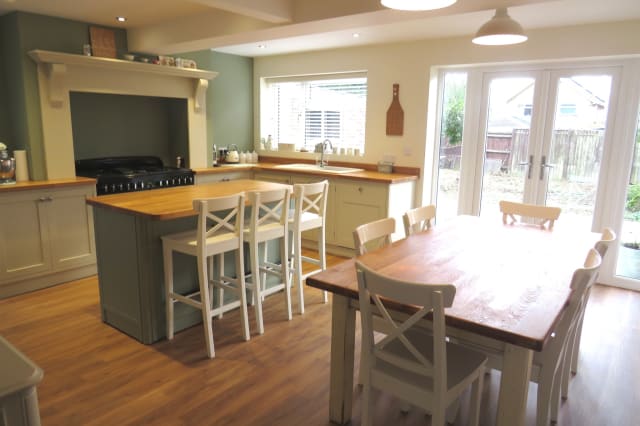 The kitchen extension to this modern house has a surprisingly cottagey feel, with Shaker units, a range cooker and a wooden floor. It's a good-sized room, at seventeen by sixteen feet, though the living room's a litle smaller. Upstairs, there are three bedrooms and a shower room, and there's a garden and garage outside. Agents William H Brown are looking for offers over £250,000. 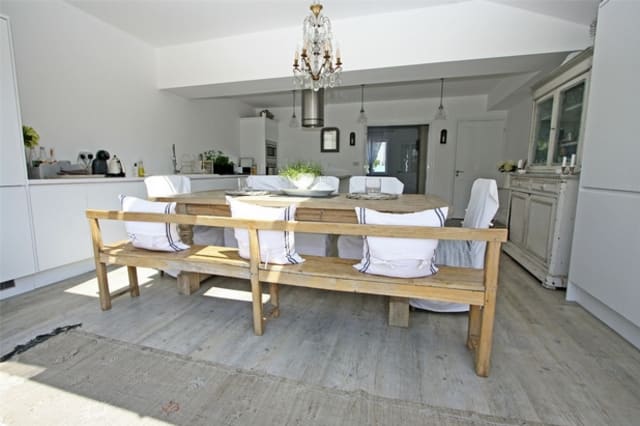 The large kitchen of this three-bed semi is light and bright, with valux windows and bifold doors. The floor is pale wood, and the walls and units are white. But the other high point of this house is the view from the master bedroom and balcony, overlooking a nearby boat yard, with Lymington River and the Isle of Wight beyond. It's in a great location near Lymington Quay, the Royal Lymington Yacht Club and the High Street, and has a south-westerly facing rear garden. It's yours for £650,000 through agent Fells Gulliver. 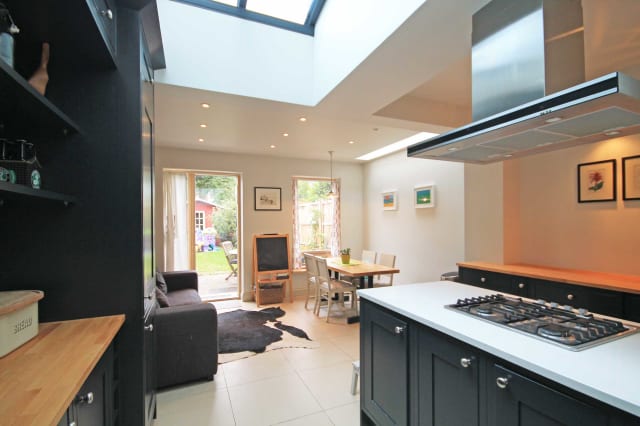 This very pretty period cottage has a lovely extended kitchen that's completely in keeping, with an exposed brick wall and traditional cabinetry. It has fitted Samsung appliances, under-floor heating and doors onto a large west facing garden. Upstairs there is a large master bedroom with fitted wardrobes, a second double bedroom and a bathroom, with a fully-powered summerhouse in the garden for more space. There's even off-road parking. The house costs £659,950 through agent Snellers.

UK property hotspots 2017 (according to Zoopla)
Up Next