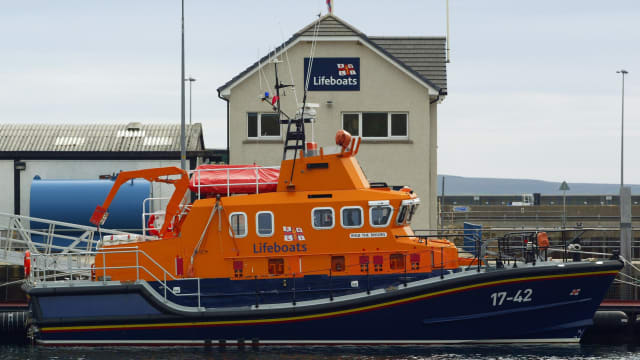 A lifeboat crew endured more than nine hours in rough seas after going to the aid of a stricken fishing boat.

Shetland Coastguard asked Thurso Lifeboat to assist the vessel which had six people on board.

The boat's propeller had been damaged in rough seas north of Whiten Head, off the north coast of Scotland.

A lifeboat was launched from Scrabster Harbour just after noon on Thursday and found the fishing vessel disabled and drifting in heavy seas.

An RNLI spokesman said: "Weather conditions and the sea state were not good throughout the day, with gale force 8 westerly winds and a large swell, which at times saw the crew facing waves of up to 8-10 metres, as well as heavy squalls of hail, sleet and rain.

"These weather conditions made for a long and difficult seven-hour tow back to Scrabster Harbour. During the return to harbour the tow parted on five occasions, both during daylight and darkness.

"After being at sea for nine hours and 30 minutes the lifeboat took the casualty alongside at Scrabster Harbour, the crew then refuelled the lifeboat and made her ready for service again by 10.10pm."

The RNLI did not give any details about the casualty.