Body of 'Thames dolphin' found washed up on riverbank 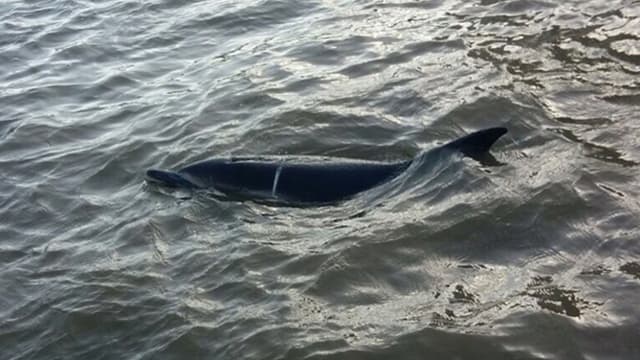 A two-metre long dolphin believed to have been spotted nine days ago in London after swimming its way up the River Thames has died.

The creature, christened the Thames dolphin, was first spotted on October 30 and had since been seen ranging up and down the stretch of river that winds through the capital.

Police confirmed a dolphin had been found dead after becoming beached on the foreshore of the southern bank of the river at Wandsworth, south London.

Pictures on social media showed the animal swimming with its fin protruding out of the river water.

Robert Deaville, from the Cetacean Strandings Investigation Programme for the Zoological Society of London, said some sightings of the dolphin had appeared to show it entangled with some man-made linear object.

He said the preliminary results from Wednesday's post-mortem investigation showed the 224cm-long dolphin was undernourished, probably relatively aged and missing some of its teeth.

Its stomach was contracted, suggesting it had not been able to find food while in the river, and there were impression marks around its torso which could have been caused by contact with a floating line.

He said: "We have been doing this work for 27 years and we have only ever had 12 common dolphin strandings on the east coast. However it came to be in the Thames, it's an unusual occasion."

Mr Deaville said it was "certainly possible" that more than one dolphin had made its way inland but that he understood there had been no further sightings reported since the animal's body was discovered by the Port of London Authority on Tuesday morning.

His team is awaiting the results of further tests to confirm whether the dolphin had an underlying infection and establish a final cause of death, he added.