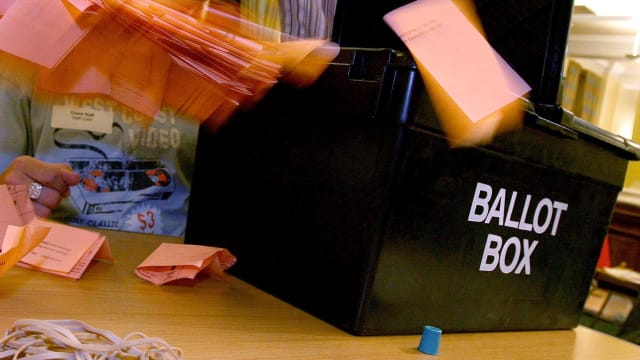 Tory MPs were faced with shouts of "shame" after being accused of blocking attempts to lower the voting age.

Labour's Jim McMahon said MPs on the Government benches had spoken at length during an earlier debate "to reduce the amount of time" available for his proposal to give 16 and 17-year-olds the right to vote in UK parliamentary elections, local elections and referendums.

His Labour colleagues shouted "shame" repeatedly before Mr McMahon later told the Commons: "I think the Government benches ought to be very concerned.

"Because 16 and 17-year-olds today might be denied the right to vote but in two years' time, they will remember who blocked them from having that democratic right only two years earlier."

In rowdy scenes with both sides heckling each other, Deputy Speaker Eleanor Laing also had to intervene to tell MPs: "Order! Order! Order! This is not a football match.

"We are having a debate. We will behave in an honourable and decent manner."

A last-ditch attempt by Labour's Wes Streeting (Ilford North) to move a closure motion to curtail the Representation of the People (Young People's Enfranchisement and Education) Bill's second reading debate and force a vote failed.

Ms Laing ruled not enough time had passed during the debate for the motion to be considered, given that MPs has spent fewer than 90 minutes on the Bill.

Debate on Mr McMahon's proposal was adjourned at 2.30pm, with the MP asking for it to return on December 1 although it is unlikely to receive time for further consideration on that day.

Ms Laing, replying to Mr Streeting's motion, said: "At this stage of the debate I will not allow a closure motion because we have been debating this really important constitutional matter for only one hour and 23 minutes."

She said many MPs and a Government minister had yet to speak before, in response to a later point of order, acknowledging that she would expect such a debate to last at least three hours.

Mr McMahon said he "absolutely respected" the ruling, asking: "What advice can I give to people who are watching this debate who can't understand why over 150 MPs have come to support it yet we can't move on to a vote?"

Ms Laing said the advice would include noting that the Bill will return at a later date.

Mr McMahon's Bill was second on the schedule for Private Members' Bills on Friday.

Time for debate on such pieces of legislation moved by backbench MPs is limited to five hours.

Several Conservative MPs earlier made lengthy speeches in support of Labour MP Steve Reed's proposals for reforms to managing the appropriate use of force in mental health units during a debate which lasted three-and-a-half hours.

The Opposition viewed this as a way to deny Mr McMahon's proposals a chance to progress.

30 injured as car driven into crowd at German carnival