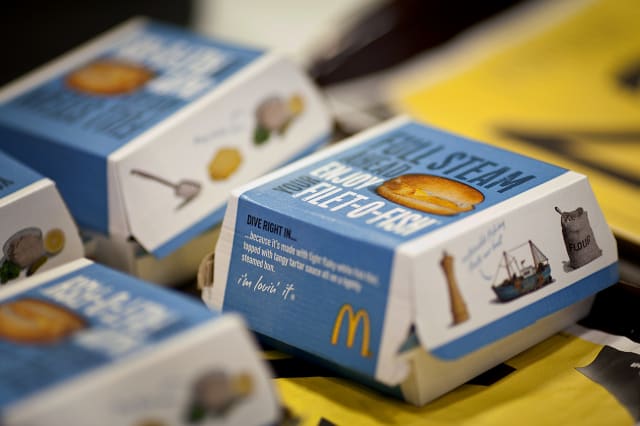 Fast food workers have revealed the meals you should avoid eating at all costs.

While most people know that chips and burgers aren't exactly good for you, there are some dishes on the menu that can really put you off when you know how (and when) they're prepared.

And, in a discussion on Reddit, employees and ex-employees of fast food restaurants reveal the items they'd never eat themselves.

Top of the list is probably McDonald's Filet-O-Fish - which may be far from fresh, unless you specify otherwise.

"At McDonald's just say you want a fish filet cooked to order. It will take ~5 more minutes but worth it compared to the filet that has been in the heated cabinet for hours," one worker says.

Another agrees, adding: "I used to work at McDonald's. Don't order our fish patties. No one ever does and I swear some days we'd make a batch and it would sit there all day until someone ordered some."

Nobody's suggesting that the Filet O Fish is in any way dangerous; just not as appetising as it might be, perhaps.

"It's been 3 years since I worked there but I can promise you that filet of fish is not fresh by any stretch of the imagination," comments one ex-worker.

And other fast food meals come in for a slating too.

"At our Subway, the 'oven roasted' chicken was actually boiled in a microwave," one worker claims.

"All Starbucks food is reheated frozen food. Ridiculous how little people realize that. Doesn't mean it doesn't taste good, it's just not fresh at all and incredibly overpriced," says another.

All these places, of course, are expected to abide by strict hygiene standards - and even when the food isn't as fresh as it might be, it should still be perfectly safe to eat.

However, sometimes fast food restaurants have incredible lapses in food safety. Bacteria from faeces, for example, has been found in the ice served with meals from McDonalds, Burger King and KFC, CNBC reports.

In April last year, a couple from Preston were carving the chicken for their roast dinner, when they discovered it was green inside.

They returned it to Morrisons, which said it was green because of bile from the gall bladder, which hadn’t been removed properly. The company apologised and offered him £15 to make up for the nasty surprise.

This October, 25-year-old Hasan Ali from West Yorkshire, broke open a Sainsbury’s Mandarin orange, to discover a maggot and hundreds of eggs inside.

He Tweeted a picture to the store, and received an apology and a £10 gift card.

Last October, Eleri Adkins, a 29-year-old expectant mother, was shocked to discover a white object growing in her vinegar, which she told the press looked like it had a head.

She returned the bottle to Tesco, which said it was a harmless substance produced when the natural bacteria in the vinegar reacted with oxygen in the air. She received an apology and a bunch of flowers.

In January this year, Mollie Howe, an 11-year-old from Dagenham, discovered six inch-long nails in her takeaway chicken meal.

The owner of the takeaway said he didn't know how they had got there, as there were no nails of that type in the shop. However, he offered to replace the food.

Jason Damms, a 41-year-old warehouse manager from West Malling in Kent, was shocked when a centipede crawled out of the middle of a pile of rice in his Tesco curry ready meal last October.

He was particularly shocked, given that it had just been in the microwave.

Malika Carrington, a nine-year-old schoolgirl from Longsight in Greater Manchester, was horrified to discover a maggot in her bowl of of Asda chicken noodles.

Her mother returned it to the shop where she received a 25p refund, and a 25p goodwill payment. She wasn’t impressed.