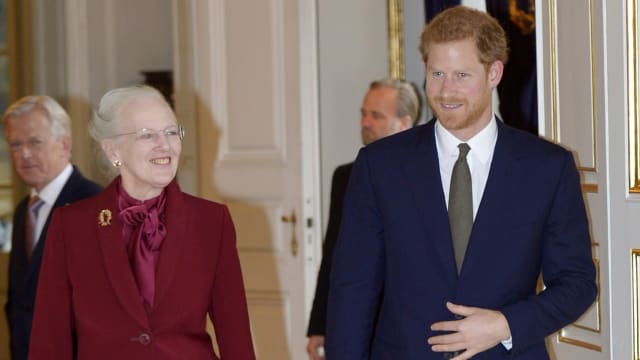 Prince Harry has started a two-day visit to Copenhagen by meeting the Queen of Denmark.

Harry arrived in the Danish capital on Wednesday and visited the Palace of Amalienborg, where he had an audience with Queen Margrethe II.

The pair met privately before arriving together in the Knights Hall, a grand room used for greeting guests.

Harry, 33, who was dressed in a navy suit, clasped his hands in front of him as he chatted to the 77-year-old Queen, who was wearing a dark red jacket and tweet skirt. The two royals posed for photographs before the Queen led the way out of the room.

Harry is related to the Danish monarch through his grandfather, the Duke of Edinburgh.

The Prince travelled to Denmark by private plane on Wednesday morning and is staying in a hotel in the city during his stay.

As part of his visit he is due to visit the offices of KPH Projects, an organisation which acts a community for start-ups and small business with a shared focus on improving society.

He will then go on to the headquarters of GAME, an organisation which aims to create social change through youth-led street and sports culture.

There, he is due to meet young volunteers and watch activities including basketball and parkour.

On Wednesday evening, Harry will attend a reception at the Tivoli Gardens, one of the world's oldest amusement parks, where he will meet figures from Danish society.

On Thursday, Harry is due to meet volunteers and service users from a national campaign to improve attitudes to mental health.

He will then join Prince Joachim, Queen Margrethe's youngest son, to visit a project which supports veterans of the Danish armed forces before visiting the Orestad Gymnasium school.

The trip to Denmark is the latest in a series of European trips made by the royal family this year, following last year's Brexit vote.

The Duke and Duchess of Cambridge visited France in March, Kate made a solo trip to Luxembourg in May, and in July the couple toured Germany and Poland.

The Prince of Wales toured Romania in the spring and, with the Duchess of Cornwall, visited Italy and Austria.