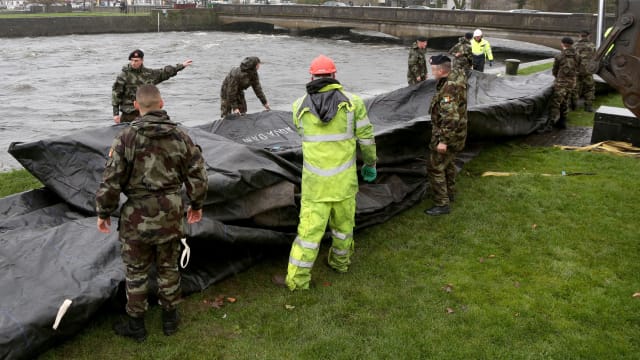 Britain is bracing itself for the arrival of Storm Brian as gale force winds look set to bring widespread disruption.

The UK is expected to be battered by up to 70mph gusts from early Saturday morning, with forecasters warning of the potential for power cuts, flooding and delays to transport.

Treacherous conditions are likely to set in from around 4am in the UK, having already struck the western coast of Ireland, as families begin their half-term holidays.

The Met Office has issued a yellow weather warning for winds across a swathe of Britain, including Wales and southern England up to the Midlands, which will remain in place until midnight on Saturday.

Chief forecaster Dan Suri said: "Gusts between 45 and 55 mph are expected widely within the warning area, with gusts of 60 to 70 mph along exposed coastal areas. These are expected to coincide with high tides, leading to locally dangerous conditions in coastal parts."

Pictures of Environment Agency staff placing steel flood barriers at Fowey in Cornwall emerged on Friday, as south-western towns braced themselves to become some of the worst affected areas of the British Isles.

National flood duty manager for the Environment Agency Ben Lukey warned members of the public against posing for photos during the hazardous conditions.

He said: "Environment Agency teams are on the ground, checking defences and taking precautionary action to close tidal gates and put up temporary barriers.

"We're working with the Met Office and local authorities and are ready to respond as necessary.

"We urge people to stay safe along the coast and warn against putting yourself in unnecessary danger by taking 'storm selfies' or driving through flood water - just 30cm is enough to move your car."

National Rail warned the stormy weather could impact on train services, with emergency speed restrictions imposed on most of the routes in Wales.

"Speed restrictions may be imposed in the worst affected areas for safety reasons, which may delay your journey."