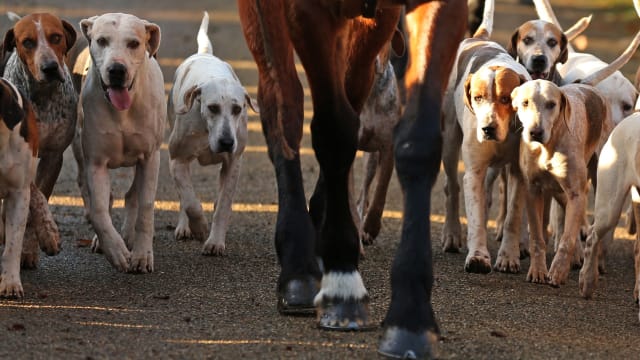 National Trust members have narrowly voted down a proposal to ban legal "trail hunting" on the organisation's land.

Members who put forward the resolution called on the National Trust not to permit trail hunting, in which a scent is laid for hounds and the hunt to follow.

During the charity's annual general meeting in Swindon, Wiltshire, they said the practise is allowing illegal hunting of foxes, deer and other animals with dogs.

Those opposing the proposal said hunts were working within the law, and claimed the charity was being used "as a political football".

The charity's board of trustees brought in new measures for licencing legal hunts - including forbidding laying fox-based scenes - in August.

Results of the vote will be considered by the Trustees of the charity at a meeting in November.

The trustees previously said the revised process for licensing trail hunts would allow the Trust to meet conservation aims, as well as welcome people and accommodate users from a broad range of constituencies.

Since the ban on hunting with dogs came into force in 2005, the National Trust has licensed legal trail hunting on its land as one of number of activities it allows.

The Trust insists it monitors the activities it licenses and has taken action against trail hunts on six occasions over the past five years.

Hunts have had licences removed or suspended following reports by National Trust staff and members, it is understood.

Last year, 79 licences were issued to 67 hunts for use of National Trust land. The charity has 5 million members.

Applications have been received since the new measures came into force in August, ahead of the hunting season beginning in November.

Anti-hunt campaigners groaned as the vote was announced at the annual general meeting, at the STEAM museum in Swindon.

Protesters gathered outside the AGM from Saturday morning to support the vote to ban trail hunting, exempt hunting and exercising hounds on Trust land.

A spokesman for the National Trust said: "National Trust members at today's annual general meeting have voted against a resolution for the cessation of "trail hunting" on all land belonging to the charity.

"Prior to the vote, the charity's board of trustees had recommended that the activity should be allowed to continue after recent improvements in licensing conditions to further safeguard conservation and access on the Trust's land.

"The conservation charity has been carefully listening to both sides of a highly polarised and passionate debate for years.

"We are pleased members have had the opportunity to debate this issue and have voted to support the Trustees' position."