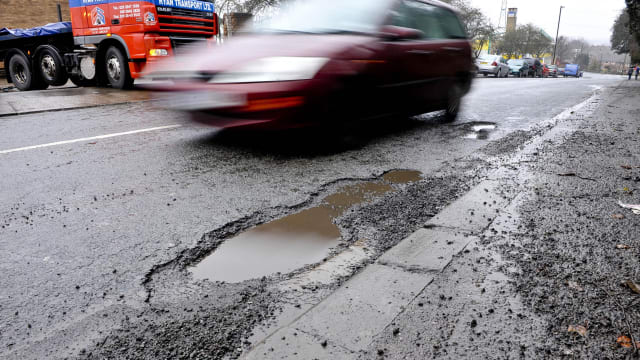 More than one million potholes were reported to councils last year, according to new research.

A study for insurance firm Confused.com also revealed that councils paid £3.1 million in compensation to drivers whose vehicles were damaged by poor road surfaces in 2016.

The figures were obtained following Freedom of Information requests to 412 local authorities.

Confused.com calculated that the UK's potholes have a total depth of more than 24 miles, which is almost four times deeper than the Pacific Ocean.

A survey of 2,000 motorists found that one in three (33%) have suffered damage to their vehicles due to poor road surfaces, including tyres and suspension problems.

Wiltshire Council made the biggest pay-outs to pothole victims at £508,000 last year.

The cost of repair varies between areas, with Westminster City Council forking out the most per pothole at £2,400.

"They are a major bugbear among drivers, not least because of the damage they do to our vehicles - around £3.1 million worth of damage.

"If drivers experience a bump in the road, they should report it to their local council as soon as possible before the problem gets any worse.

"The cost of motoring alone is getting more and more expensive and damage repairs is a big contributor to this, as car parts increase in price as well."

The annual road maintenance survey by the Asphalt Industry Alliance found that local authorities in England and Wales need more than £12 billion of funding to bring the road network up to scratch.

This is several times more than councils' entire annual revenue spending on highways and transport, which was £4.4 billion in England last year.

Martin Tett, the Local Government Association's transport spokesman, said: "Councils share the frustration of motorists having to drive on roads that are often inadequate and are doing the best they can in challenging circumstances.

"Only with adequate funding from central government can local authorities deliver roads for the 21st century."

A Government spokeswoman said: "Year on year, the Department for Transport is providing councils with record levels of capital funding - more than £7.1 billion up to 2021 - for them to improve local roads and repair potholes.

"It is vital councils spend this cash to keep roads in good condition.

"We've also announced plans for a new major road network that will give councils access to a multi-billion pound fund to improve or replace the most important A-roads in their area."