The £1 coin that could be worth nearly a grand 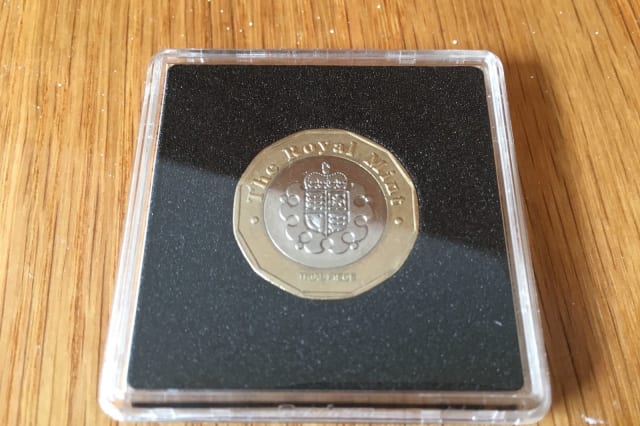 Whenever a new coin is launched, it's a big event for collectors - and in the case of the new 12-sided £1, there's one version that's selling for up to £950.

More than 200,000 trial coins were produced by the Royal Mint before the launch of the coin in March, to help supermarket chains, banks and the operators of vending machines get ready for its coin's introduction.

SEE ALSO: Everything you need to know about the new £1 coin

And while they're not considered rare, they are fetching very high prices.

One trial £1 coin sold for £950 in August, while another made £600 earlier this week. And a third is currently up for sale on the auction website for a staggering £1,250, with eight people 'watching' the auction.

And they aren't even legal tender.

"They are most certainly an interesting piece for anyone to have in their collection, but they are not as scarce as some of the recent reports and eBay listings suggest," says Yasmin Britton of coin-collecting website ChangeChecker.

Some new £1 coins are worth even more. Back in July, the Royal Mint confirmed that a certain number of new £1 coins had been stamped on one side with 2016 - but 2017 on the edge of the reverse.

While most were withdrawn before being circulated, at least one slipped out - and has been valued at £3,000.

Other valuable new £1 coins include one error coin with a round raised lip around the edge of the coin and another known as the 'leaked egg' error, because part of the silver in the middle has leaked into the gold.

The first run of new £1 coins feature Jane Austen, Sir Isaac Newton and The Royal Flying Corps. However, other versions will follow - and could become as collectible as some of the rare 50p pieces that can now sell for hundreds.

Incredibly valuable coins
This Australian coin was the first half crown minted under Edward VII. The price for a Melbourne coin in good condition is particularly high because around half of them were produced with faults. It’s now worth £7,500 and has risen in value some 13,789% since it was first in production

The only half crown on the list gets its position from its rarity value. However, the fact this is a silver coin rather than a gold one does affect its value - so it’s worth £10,500. It’s significantly less than others on the list - but it has still appreciated 79,445%.

This is the newest coin in the top ten, and the first year that sovereigns were produced featuring the Queen. The coin was produced in small numbers for investors - rather than for circulation - so is thought to be worth £12,500, due to its rarity.
This is another collectable gold coin prized for its rarity value. It’s worth £15,000 today and has appreciated 191,716%
This was issued in very small numbers, as it was produced during WWI. As a result, few are available - especially as uncirculated coins - so one in good condition will fetch £16,000.
This is another coin prized for its rarity, thanks to a relatively low number being minted, and more being taken out of circulation during WWI. It’s now thought to be worth £17,000 after appreciation of 42,084%.
This 1926 coin has shot up in value and is now worth £31,500. The rise in value is partly to do with a very low mintage, and partly to do with the fact that people were asked to hand their sovereigns over to be melted down during WWI, which took many of them out of circulation.
This brass threepence from 1937 has benefited enormously from the fact that Edward didn’t stick around for long to get too many coins struck in his image before he abdicated. It is now worth £45,000.
This 1933 penny has seen a stunning appreciation in value and is valued at a whopping £72,000 today. The value is due entirely to rarity. Only around seven British versions of this coin were minted, and were intended for the King to bury under the foundation stones of new buildings. They have been subject to theft, and a few are said to be in private hands now.
This isn’t the oldest coin in the list, but it was produced in a year when all gold coins were recalled and exchanged for paper money - so the vast majority were melted down. Its rarity and popularity puts it head and shoulders above the rest. It is worth an eye-watering £6,500,000, and has increased in value 2,178,885% since it was produced.
Up Next