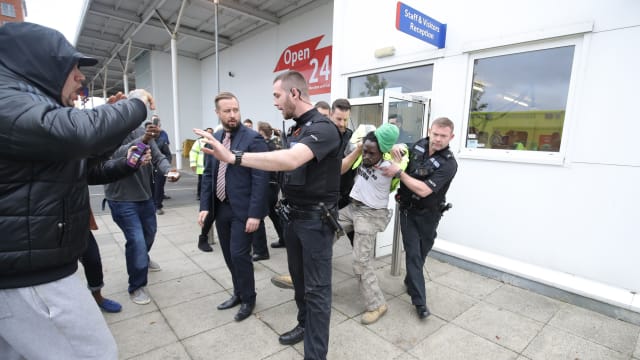 A former security worker at Tesco who staged a day-long protest in the roof space of a store to demonstrate against his sacking has been arrested.

Adam Jammeh claimed he was fired after being falsely accused of stealing from the shop.

Mr Jammeh, who worked for Total Security Services (TSS), climbed into the ceiling of the Tesco Extra in Portman Road, Reading, at around 6pm on Thursday.

He was pictured being taken away by police on Friday afternoon.

A statement from the force said: "An incident at a Tesco supermarket in Portman Road, Reading, involving a concern for a man's welfare has been safely resolved."

Mr Jammeh had posted a series of livestreams on Facebook, demanding chief executives from Tesco come to the store to address his grievances.

He said he had been demonstrating for seven months over the issue.

Appearing to shout towards customers in the shop on Thursday evening, he said: "I'm not going nowhere. I've got food in my bag, I've got water in my bag, I am well prepared."

The store was closed shortly after the incident began, and a spokeswoman at Tesco said the company was "assisting police with the matter".

A spokeswoman for TSS said: "We are aware of the incident involving a former employee of Total Security Services and are assisting the police and Tesco in this matter."