What the papers say - October 12 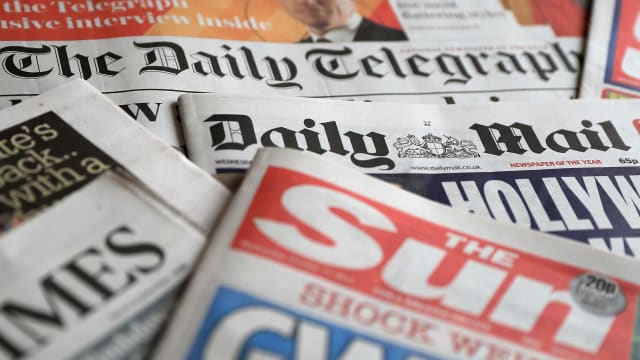 Since allegations of sexual harassment were first published last week, a string of showbiz stars and high-profile figures have come forward to make further accusations or condemn the movie mogul's behaviour.

The latest celebrity to speak out is actress and supermodel Cara Delevingne, the Daily Mirror reports, who claims Weinstein made advances towards her in a hotel room.

The paper brands the award-winning producer a "sex beast", and says Delevingne told how she felt "powerless" and "scared" by the encounter.

The i takes a different angle to the story, reporting on Prime Minister Theresa May's "attack" on Weinstein.

Mrs May released a strongly-worded statement calling the allegations "deeply concerning", the paper reports, as senior politicians demanded the film boss be stripped of his CBE.

Meanwhile, The Guardian features a first-person piece by actress Lea Seydoux, star of the film Spectre, who describes an encounter with Weinstein in his hotel room.

She claims she had to defend herself when the producer "jumped" on her and tried to kiss her.

Away from Weinstein, the paper also reports on claims by the International Monetary Fund that higher income tax rates for the rich could help reduce inequality without having a negative impact on economic growth.

Political matters also dominate many of the other front pages, with the Daily Telegraph reporting on the revival of the "dementia tax" row.

Social care minister Jackie Doyle-Price said pensioners should not regard their homes as "an asset to give to their offspring", the paper says, and that it was "unfair" for younger taxpayers to "prop up people to keep their property" when it could be sold to help pay for their care needs.

In a turbulent time for the Conservative party, tensions appear to be reaching breaking point between Mrs May and Chancellor Philip Hammond, the Daily Mail reports.

The paper says relations between the pair were "plunged into the deep freeze" as Mrs May "dramatically slapped her Chancellor down" after he undermined her Brexit strategy.

Elsewhere, The Times says US President Donald Trump looks set to meet the Queen next year in a "downgraded" visit to the UK, while the Daily Express reports that the monarch will no longer lay the wreath at the Cenotaph on Remembrance Sunday as Prince Charles takes over the duty.

The Sun reports that British IS recruiter Sally-Anne Jones, dubbed the White Widow, has been killed in a US drone strike.
Read Full Story Click here to comment