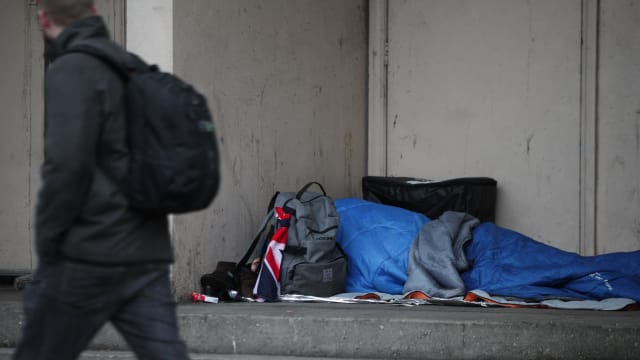 Tens of thousands of England's "forgotten homeless" are trapped without a permanent roof over their heads for months on end because of a lack of affordable or accessible housing, a new report says.

Single homeless people are being priced out of social housing as well as private sector options - and are excluded from even registering for housing in certain instances, a report by homelessness charity Crisis said.

A chronic shortage in affordable social housing is part of the problem, with social lettings to single homeless people in the country having dropped by almost a third in recent years.

On any given night, the average number of single people experiencing some form of homelessness is estimated to be 77,000, with 200,000 of the same group experiencing homelessness each year, the report, Moving On: Improving Access for Single Homeless People in England, found.

Around a third (26,000) have no acute support needs and are deemed low priority, for instance they do not need to be placed in supported housing, with the primary barrier to ending their homelessness being a lack of affordable or accessible housing.

However, many landlords are reluctant to let properties to this group, the report says, while many are unable to afford the up-front costs and rent demands of the few available options in the private sector, a situation compounded by restrictions on housing benefit entitlement.

Even those eligible for social housing may be unable to afford the rent or up-front costs of moving into a new home, the report warns.

And blanket housing register exclusions in some areas are stopping people who need homes from registering for housing for reasons including having an insufficient local connection, a history of rent arrears or anti-social behaviour, it adds.

Crisis chief executive Jon Sparkes said: "We know that homelessness is not inevitable. With the right assistance, single homeless people can successfully secure a home to help them rebuild their lives.

"That's why we're calling on the Government to end the use of blanket restrictions that mean people who desperately need a home aren't denied the help they need."

Crisis welcomed the Government's pledge earlier this week of an extra £2 billion for affordable housing, but said it needed to go "much further" to improve access to housing for single homeless people.

The charity said it was not calling for "a redistribution of a declining social housing stock to the detriment of others", but rather that enough of these homes were built "to truly address our homelessness crisis" and that barriers to access were tackled.

These include the Government scrapping blanket housing register exclusions, and the introduction of targets for the adequate supply of social housing.

Chief executive of the Chartered Institute of Housing, Terrie Alafat, said: "The new investment in affordable social rented homes announced by the Government this week is welcome, but this report highlights once again just how far we still have to go.

"The scale of homelessness is a national disgrace and we have to act now."

A Department for Communities and Local Government spokesman said: "This Government is determined to help the most vulnerable in society. That's why we're implementing the Homelessness Reduction Act which requires councils to provide support to people earlier and investing £550 million to 2020 to tackle homelessness.

"We announced a further £2 billion for affordable housing funding, bringing the total to more than £9 billion, for a new generation of council and housing association homes. We've also launched a wide-ranging, top-to-bottom review of the issues facing the social housing sector."

Boy, 15, becomes youngest ever to sail solo around Britain