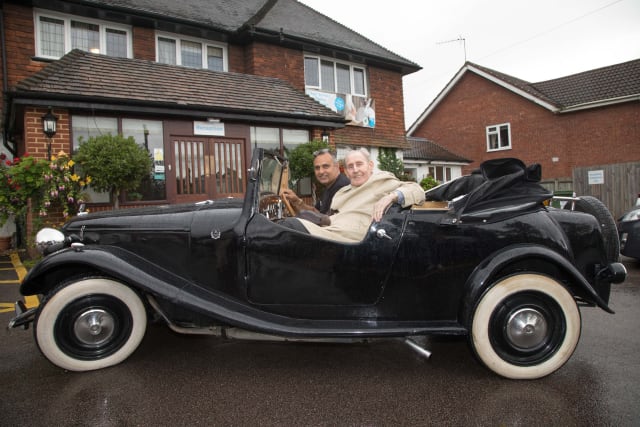 A Second World War veteran who survived one of Britain's worst maritime disasters has celebrated his 100th birthday.

Ernest Beesley got a card from the Queen and a note from singer Dame Shirley Bassey as he marked the milestone with a trip in a vintage car, dancing the Tennessee Waltz and being serenaded.

He served in the Royal Engineers during the Second World War and was aboard the HMT Lancastria on 17 June 1940, when it was hit and sunk by a German air raid near the French port of Saint-Nazaire and about 4,000 men, women and children died.

Mr Beesley, who was born in Wallingford, Oxfordshire, on 30 September 1917, credits the love of his late wife Doris to whom he was married for 72 years before she died in December 2013, along with his passion for gardening, for his long and happy life.

Being green-fingered has helped keep his mind and body sharp, he said.

Speaking from his Bupa-run care home in Uxbridge, west London, where he was surrounded by friends and family on his big day, Mr Beesley said: "It was a wonderful day, one of the best days of my life."

Mr Beesley, who had been working on railway lines in Brittany, was on the Lancastria as it evacuated troops from France, shortly after the Dunkirk.

Fewer than 2,500 people survived the disaster, which marked the largest loss of life from a single engagement for British forces in the Second World War.

He recounts thousands of troops and civilians being sent to the coastline to escape the continent, with his group sent to the ill-fated Lancastria.

He was below deck taking a shower when the fatal air raid began.

He recalled: "I had my shower and came back to where my kit was. I'd only been stood there for minutes when there was this vast explosion and the ship seemed to leap out of the water. A bomb had fallen down the ship's funnel and just blew it to bits really.

"I don't remember panicking, it was all very calm. I knew the ship was going to sink and I had to get away from it. I'd managed to get a life jacket and I jumped off and swam, probably about a quarter of a mile, until I saw a navy corvette heading towards me.

"At first I thought it was going to hit me, but the crew threw me a life raft which I was able to board."

He was hit by cramp and fell into the water from the crowded life raft. Unable to clamber back on, he spent more than an hour in the water before being picked up by a boat, which he helped row to rescue other survivors.

The rowing boat was later picked up by a larger vessel and he was taken back to safety in Plymouth.

Mr Beesley spent seven years with the Royal Engineers through to 1946. He and his wife lived in Perivale, west London, before he moved to the care home in 2009.

They did not have children but he is close to his nieces who were among the loved ones taking part in his birthday celebrations.