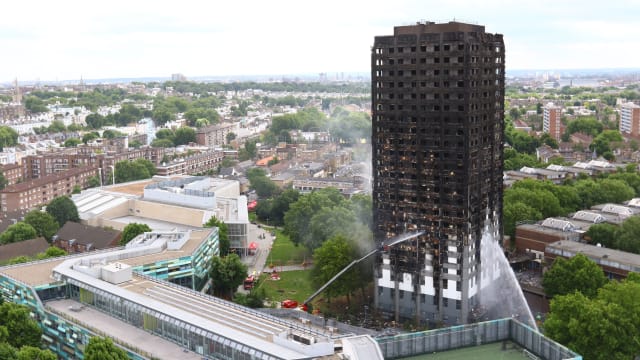 The Grenfell Tower disaster triggered a mental health crisis of an "unprecedented" scale, a leading doctor has said 100 days on from the fire.

NHS data shows 457 adults have been flagged as being in "urgent need" of treatment for post-traumatic stress disorder, while 39 children are also receiving specialist mental health care.

Survivors and nearby witnesses of the June 14 inferno, which left around 80 dead, are considered to have a 50% chance of developing the disorder, according to health service modelling.

Those mentally scarred by the tragedy report suffering from flashbacks and sleeplessness, which can be triggered by the sight of the tower's wreckage, clinicians say.

Dr Alastair Bailey, the clinical psychological lead at the NHS Grenfell Tower Trauma Service, said the impact of the fire is unlike anything seen before by the health service.

He told the Press Association: "It is unprecedented, I don't think we have experienced anything like it. We had similar events that have been large-scale, traumatic events that have occurred in the UK.

"We think about the London bombings, the terror attack in Tunisia which affected British nationals and other events over the years, but nothing has affected a community like this for a number of years.

"In terms of a trauma response, managing an NHS response to trauma, we are using ideas and protocols and procedures that were developed after London bombings and other similar events, which are quite different."

A staff of around 170 mental health workers, soon to be more than 200, have been tasked with supporting the west London community, holding specialist surgeries and knocking on doors to ensure support is given to those affected.

But, with more than 150 families from Grenfell Tower or Grenfell Walk still in hotels, many people grappling with trauma are reluctant to begin receiving treatment. CNWL, the main service responding to the disaster, said 20% of patients referred to them decline further treatment, often citing their living arrangements as the problem.

As the neighbourhood marks another grim milestone since the country's most costly tragedy in a generation, just five households left destitute by the blaze have found permanent accommodation.

Four of these are in Kensington and Chelsea, while one person has moved into a property outside the borough, the latest figures from the Grenfell Response Team show.

Meanwhile dozens of former residents are waiting to be rehoused in temporary accommodation.

The remains of 66 people who died in the fire have been formally identified, with police believing the final death count could stay around 80 or a little lower.

The London Fire Brigade used the anniversary to issue a fresh warning to landlords over fire safety in high-rise blocks.

The Brigade has been advising local authority housing providers to review and update their fire risk assessments, and working with local authorities to distribute a fire safety guide for people who live in flats across the capital.

Next week, the area's embattled council will discuss a petition demanding a "comprehensive update on the current situation including the reason for the delays is made available to the public as a matter of urgency".

The Royal Borough of Kensington and Chelsea will also debate a motion, put forward by Councillor Kim Taylor Smith, calling on council leadership to "terminate the current contact and establish a new management structure for the council's social housing stock".

The Tenant Management Organisation which oversaw the running of Grenfell Tower was stripped of responsibilities over the surrounding estate in response to a torrent of criticism.