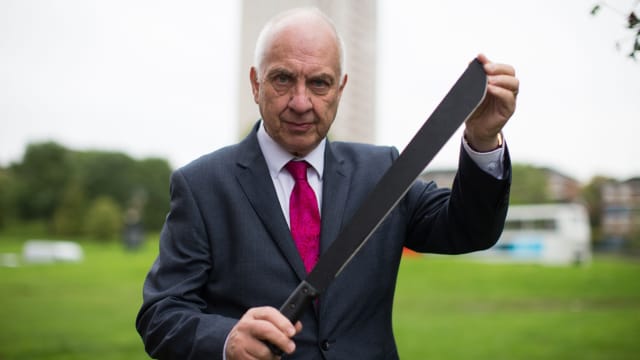 The two revolvers were found together with eight rounds of 9mm ammunition, discarded along with a couple of BB guns and 184 knives.

All the weapons were found inside special surrender bins dotted around the West Midlands, which is in the grip of a wave of gun and knife crime.

A spate of shootings has also seen the launch of a separate firearms surrender - the region's first in three years - led by West Midlands Police.

It came after the latest fatal gun attack in which Mekel Sterling died in a drive-by shooting in the Hockley area of Birmingham on September 13.

However, the knife surrender bins have been around since 2014 after a partnership between West Midlands Police and Crime (PCC) Commissioner David Jamieson, organisation Word 4 Weapons and community activists.

The latest operation to empty the 12 bins, eight of which are in Birmingham, was welcomed by Mr Jamieson who added "all the knives and guns will now be destroyed".

He has again urged people to keep "doing the right thing" and dumping weapons.

Mr Jamieson said: "Our streets are safer as a result of these bins. If anyone out there has a weapon - or knows someone who does - I would urge them to get rid of it in a surrender bin as soon as possible."

The revolvers were recovered from the same bin in Birmingham's Small Heath area.

But the majority of knives - 94 in all - were recovered from just a single bin located in West Bromwich, West Midlands.

Michael Smith, Word 4 Weapons chief executive, said: "Since 2014 we have worked successfully alongside the PCC's office by providing safe and secure knife bins for the collection and disposal of deposited weapons."

He added the successful scheme had seen a significant amount of weapons taken off the streets and said the work would continue.