Hundreds take to the streets for Edinburgh's Riding of the Marches 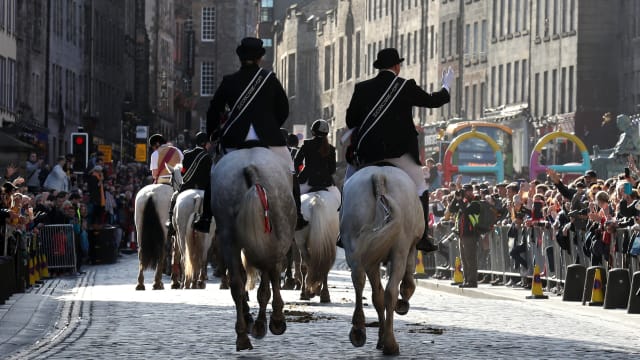 Around 280 horses and riders have taken over the streets of Edinburgh, continuing an ancient tradition.

Crowds of onlookers lined the streets of the capital for the Riding of the Marches, particularly the final stage on the Royal Mile.

The historic event, which dates back to the 16th century, sees riders make a seven-hour journey from the Braid Hills towards the city, ending at the Mercat Cross on the Royal Mile.

Now an annual event, it returned to Edinburgh in 2009 after a gap of more than 60 years.

It sees the appointed Edinburgh Captain and Lass lead hundreds of horses up the Royal Mile where they return the city flag to the Lord Provost.

The riding tradition, known as "common riding" in the Borders, is believed to date as far back as the 12th century.