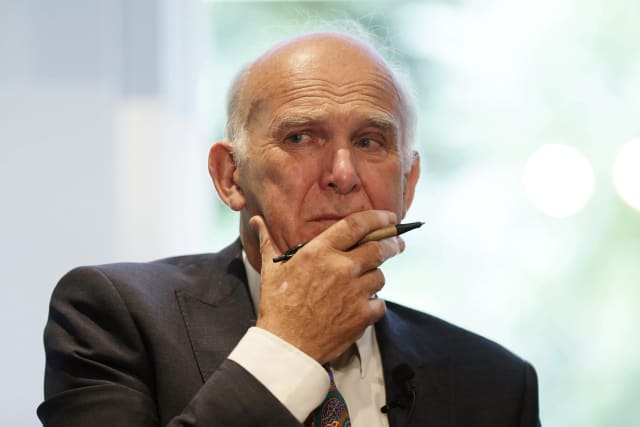 Sir Vince Cable has warned that Britain is "sleepwalking" towards another economic crisis and has become hooked on unsustainable debt.

The former business secretary said the UK economy needed a new approach to prevent it being dragged into recession as Britain edges closer to Brexit.

His comments come as the banking industry marked a decade this week since Northern Rock marked the start of the financial crisis, which saw the lender crash into Government ownership following a full-blown liquidity crisis.

The Liberal Democrat leader, who is widely credited with predicting the credit crunch of 2008, told the Press Association: "10 years on since the collapse of Northern Rock, Britain is sleepwalking into another economic crisis.

"Banks are now safer and better capitalised, and the Liberal Democrat policy in government of splitting retail banking from more risky 'casino banking' has added to stability.

"But despite progress made during the coalition years, the country has still not fully recovered from the economic heart attack it suffered a decade ago."

Bank customers sparked a run on Northern Rock in 2007 after the lender's reliance on the wholesale markets, as opposed to customer deposits, left it dangerously exposed when the sub-prime mortgage crisis struck the United States.

Lengthy queues formed at cash points and shares in the bank tanked, as liquidity dried up and Gordon Brown's Labour Government was forced to ensure its future in February 2008 by taking it into public hands.

The Government went on to throw a lifeline to three of the UK's biggest banks - Royal Bank of Scotland, Lloyds TSB and HBOS - in a bid to instil a degree of calm in what the then Bank of England governor Lord Mervyn King described as the worst financial crisis since the 1930s.

Since then, the Bank of England has attempted to shore up the UK financial system by forcing high street banks to hold more capital, while lenders are also ring-fencing their retail banking businesses away from the more precarious investment banking operations.

But concerns are mounting over potential bubbles in areas such as the car finance market, unsecured personal loans and credit card lending as households take on more debt in the face of sluggish wage growth and rising inflation.

To compound matters, recent GDP figures showed British economic growth was limited to 0.3% in the second quarter in what the Office for National Statistics described as a "notable slowdown".

"Living standards are being eroded by the fall in the pound, while the uncertainty caused by Brexit is undermining business investment and consumer confidence.

"A bold new approach is needed to steady the ship, drive up productivity and living standards, and prevent the economy from tipping into recession."