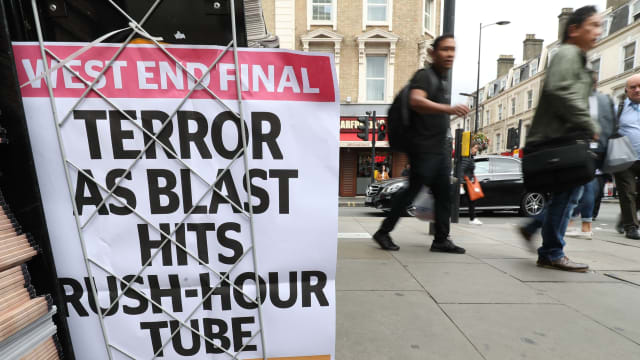 Passengers caught up in the Parsons Green terror attack were seen "taking selfies" as commuters fled amid the "chaos", it has been claimed.

But he said he was shocked to see some pausing for selfies in the stampede.

The 25-year-old, who works in politics and had been travelling to his office, told the Press Association: "Someone said there had been an explosion, there was white stuff, someone said there was a lot of wires, one girl outside the station had her leg pretty badly cut up.

"People were saying there was one man who was singed down the side of his body, including his hair.

"It felt like an eternity, but it was only a couple of minutes, probably.

Describing the moments immediately after the blast, Mr Barnett said: "I was sitting there, headphones in, at Parsons Green, the doors open fine, I'm not really paying attention and all of a sudden hundreds of people run past me screaming a mixture of 'stampede', 'attack', 'terrorist', 'explosion', 'get off the train', 'everyone run'.

"Parsons Green station has a staircase at the front of the carriage where the train pulls up - I'm running and keeping my head down because there might be gunfire and on to the staircase.

"But when I was on the staircase, the stewards and other passengers, they are shouting 'stop, stop, stop', so I ended up squashed on the staircase, people were falling over, people fainting, crying, there were little kids clinging on to the back of me.

"It is absolute chaos, it was quite scary because at one stage we thought we might be trapped there - I heard a pregnant woman lost her shoes and had fallen over."