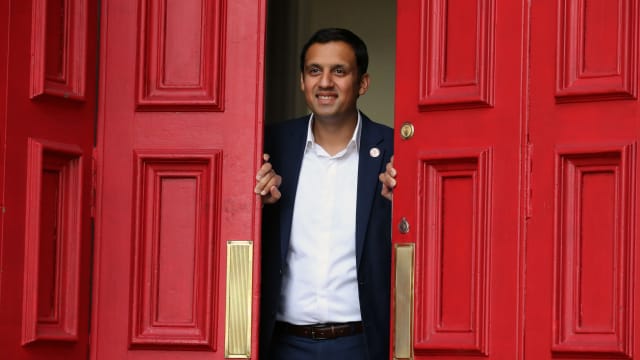 MSP Anas Sarwar has launched his Scottish Labour leadership campaign with a pledge to deliver "equality, opportunity and fairness" in power.

He spoke of his ambition to become Scotland's next First Minister during the event held in Nicola Sturgeon's Glasgow Southside constituency.

The Glasgow politician said he would pursue policies to "rescue the NHS", end the gender pay gap and lift children out of poverty by topping up child benefit, as he outlined his leadership pitch.

"Despite being a Glasgow MSP, despite representing one of the poorest communities in our country, Nicola Sturgeon's SNP has presided over £400 million of cuts to this city," he said.

"Half of the children in this constituency are deprived. That is a national disgrace. And yet Nicola Sturgeon refuses to use the powers we have to help them.

"Our plans to top up child benefit would be worth millions of pounds to families in this city, but she fails to act.

"That is why here in the Gorbals, at the start of this campaign, we are parking our tanks on Nicola Sturgeon's lawn. This campaign is not just about electing a Labour leader, it's about electing the next Labour First Minister."

He added: "I don't want to be a Scottish Labour who just talks about fighting inequality, creating opportunity and building a fairer society.

"I want to deliver that equality, opportunity and fairness as the next First Minister of Scotland."

Mr Sarwar - who is seen as being in the moderate wing of the party and has the support of host of key MSPs and MPs - also told Labour supporters they could choose "to continue to divide, or to bring our party and our country together".

The plea for unity comes amid fears his candidacy could open up divisions on the left of the party.

He is competing for the leadership against his Holyrood colleague Richard Leonard, who is closer politically to UK leader Jeremy Corbyn.

Mr Sarwar has insisted he now backs Mr Corbyn despite signing a letter urging him to step down last year.

His wealthy background has also come under scrutiny, with questions over wages and union representation at his family's business, and his decision to send his children to private school.

Meanwhile Mr Leonard, who will launch his leadership campaign on Saturday, has been backed by union chiefs at the Transport and Salaried Staffs' Association (TSSA).

The union's executive committee unanimously gave its support to the former GMB union organiser, saying his "radicalism" could help the party win back power both in Scotland and across the UK.

TSSA leader Manuel Cortes said the decision to support Mr Leonard was "one of the easiest decisions" the union's executive committee had ever made.

He stated: "Standing up for Labour values is in Richard's blood. His track record as a trade unionist and socialist speaks for itself.

"Richard offers Scottish Labour the fresh start our party needs to win back power in Holyrood and help Jeremy Corbyn into Number 10 so we can have Scottish and British governments for the many not the few."