The US will be 'steadfast ally' to the UK during Brexit, Rex Tillerson pledges

The United States will be a "steadfast ally" to the United Kingdom during the Brexit process, Rex Tillerson has declared.

The US Secretary of State, who was in London for talks with Boris Johnson and Theresa May, said Washington would stand by Britain as it faces the "unique challenges" of leaving the EU.

Mr Tillerson and the Foreign Secretary held talks covering a wide range of issues including Hurricane Irma, the North Korean crisis and the situation in Libya. 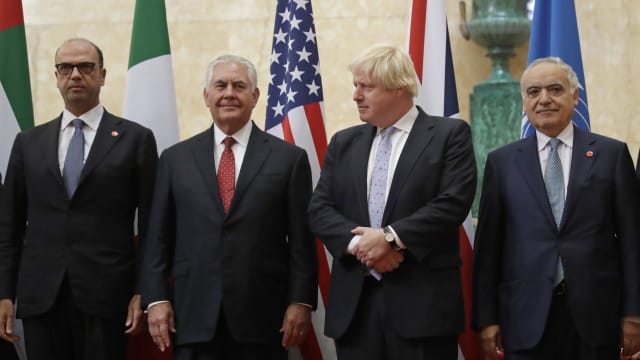 At a press conference with Mr Johnson, Mr Tillerson said: "Whilst Brexit does present unique challenges to the British people, please know that you have a steadfast ally in the United States.

"We will stand by our ally as Brexit continues to take shape."

Mr Tillerson praised the co-operation between the UK, US and France in dealing with the aftermath of Hurricane Irma in the Caribbean.

He said: "The co-operation through that event has been extraordinary. All of us set down our own concerns and said 'what can we do to help each others' citizens' and we're very thankful for that.

"We're also committed to take that same spirit into the aftermath and how can we work together and co-ordinate now to complete the recovery and begin the long, long process of reconstruction in a way that is beneficial to everyone."

Mr Tillerson, who had a meeting with Mrs May's national security adviser which the Prime Minister "dropped in" on, said it was a "short but very useful" talk.

He thanked the UK for its support in sending a "very strong message to North Korea" that Kim Jong Un's nuclear ambitions were "not acceptable to any member of the international community".

Mr Tillerson said he discussed with Mrs May "the threat that Iran poses to the region through its destabilising activities in Yemen, in Syria and in other parts of the region".