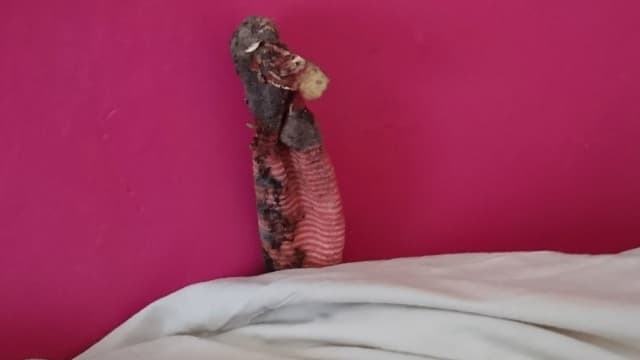 A family called out the RSPCA after mistaking a dirty sock for an apparently lifeless lizard.

The stripey pink "creature" was spotted underneath a bed at a property in Goring Road, Coventry, last Friday, prompting a call to the animal welfare charity.

Animal collection officer Vic Hurr, who was called to the scene, said she approached the find cautiously as she was unsure about what breed it could be.

The RSPCA officer said: "It was around seven inches long and about two inches wide.

"It was protruding from the edge of the bed and it wasn't moving at all. As it wasn't very light, I got out my torch to see better and that's when I realised it wasn't a lizard at all ... it was a pink stripey sock!

"I advised the young girl whose bedroom it was to tidy her room and to take care of her socks, but not before reminding her that another one will turn up soon as they are usually in pairs!"

An RSPCA spokesman said family members were "quite mortified" at their error.