George Osborne 'wants Theresa May chopped up in bags in freezer' 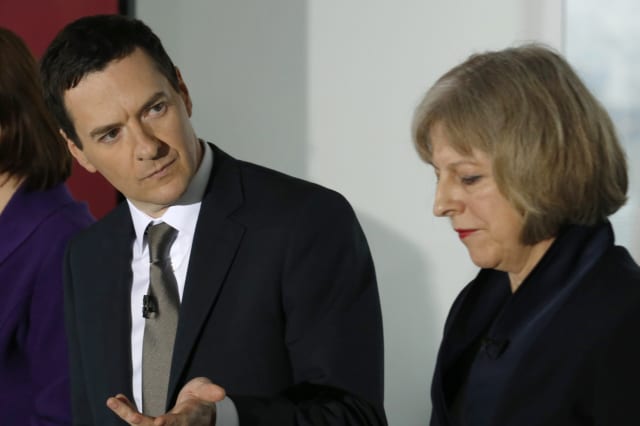 George Osborne has reportedly claimed he will not rest until Prime Minister Theresa May is "chopped up in bags in my freezer", according to a profile of the chancellor-turned-newspaper editor.

Tory MP Nadine Dorries said the reported comment was an "insight into the way his mind works", while Mrs May's former aide Nick Timothy also took a swipe at the former cabinet minister.

The profile in Esquire highlighted the way Mr Osborne had used his editorship of the London Evening Standard to criticise Mrs May's leadership.

The Prime Minister sacked Mr Osborne when she took over at Number 10 and he quit as an MP after the surprise announcement of his move into journalism.

The Esquire profile said: "According to one staffer at the newspaper, Osborne has told more than one person that he will not rest until she 'is chopped up in bags in my freezer'."

Ms Dorries, who previously clashed with Mr Osborne and his ally David Cameron, said the piece was "a brief insight into how his mind works - and always has".

Mr Timothy highlighted a quote in the piece from a former aide saying Mr Osborne "doesn't want people to think he's an arsehole, because he's not an arsehole".

Mrs May's former joint chief of staff added: "Not sure why he worries people think he's an arsehole."

Asked for the prime minister's reaction to the Esquire piece, her official spokesman said: "The contents of the former chancellor's freezer are probably not a matter for me."

Labour former minister Chris Bryant, speaking during a parliamentary debate on barriers for women in standing for the Commons, said: "The words of George Osborne about the Prime Minister are absolutely disgraceful.

"He cannot say that he wants her chopped up in bags in the freezer, which he is today reported to have said.

"He should apologise and withdraw. That kind of language is misogynistic in its basis and it needs to be done away with."