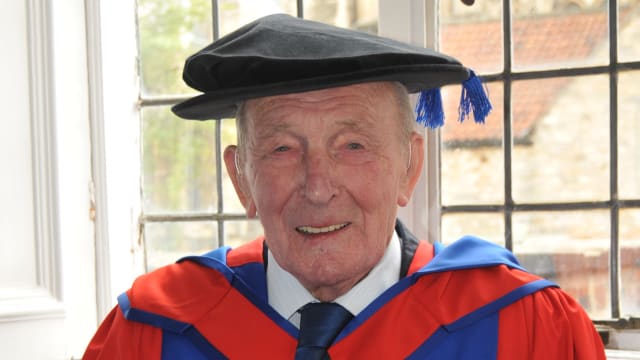 The last remaining British airman who took part in the Dambusters raid has been honoured by the University of Lincoln.

George "Johnny" Johnson, now aged 95, was given a standing ovation as he received an honorary doctorate in recognition of his enormous contribution to society.

The Lincolnshire-born veteran, who lives in Bristol, joined the RAF in 1940 and served as a bomb aimer during the Dambusters operation in May 1943.

Eight Lancaster bombers were lost during the overnight raid, leading to the deaths of 53 of the 133 air crew who took part.

After retiring from the RAF as a squadron leader in 1962, Mr Johnson took up teaching, supporting people with learning difficulties and working at hospitals in Nottinghamshire.

Professor Heather Hughes, from the University of Lincoln, said: "We cannot think of a person more rewarding to be given an Honorary Doctorate.

"For many years we have been working in partnership with the Lincolnshire Bomber Command Memorial Trust to preserve the heritage of Bomber Command by constructing a digital archive.

"Johnny is such an important person to the Bomber Command legacy, it is only fitting that we bestowed such an honour on him. It was also an opportunity to recognise all the good work he did as an educator in his years after the service, and to see the spontaneous standing ovation our graduates gave him was wonderful."

Mr Johnson said: "For me, it is important to say that I am the lucky one, as I am still alive.

"My message to graduates was to have perseverance, and motivations, always. I'm so grateful for the recognition of my work after service, it gives me so much pleasure, and I am very grateful to the University of Lincoln for providing the opportunity to do that."