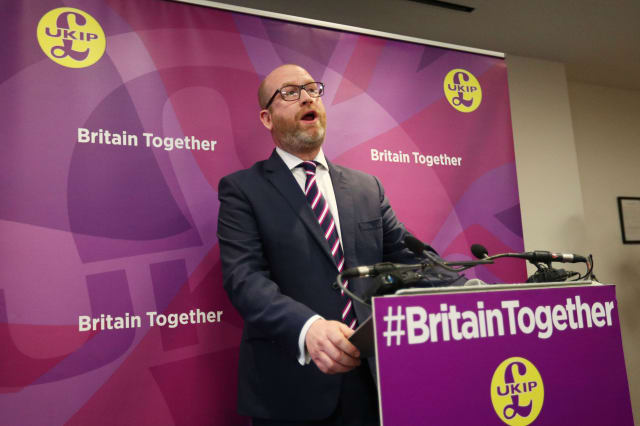 Ukip leader Paul Nuttall has said the democratic process must continue as he confirmed his party will launch its manifesto on Thursday.

National campaigning in the General Election has been suspended since Monday's terrorist attack in Manchester.

Mr Nuttall has now become the first leader of a major party to say that campaigning will be restarted.

"We are all horrified by the horrific events that took place in Manchester," he said.

"Following those events it is right and proper that political parties suspended their campaigns for a short period as a mark of respect to those who lost their lives or suffered appalling injuries.

"But we cannot be cowed or allow our way of life to be undermined by those who wish to do us harm.

"These people hate the way we live, hate our freedom and hate our democracy.

"The best response we can make is to ensure that the democratic process continues and therefore I have decided that we must to go ahead with the launch of the Ukip General Election manifesto tomorrow."

Mr Nuttall added: "For those who say that nothing must change, but then complain, it is by prolonging the disruption to normality that we allow the terrorists to win.

"Politics has never been more important. Politicians must deal with these issues."

Mr Nuttall was last month forced to deny his party was anti-Islam after it said it would support banning burqas and sharia courts.

Ukip would also introduce harsher sentences for sex grooming when the criminal and victim are of a different race as part of its integration strategy.

The Conservatives have ruled out all national and local campaigning on Wednesday.

Labour will not be campaigning nationally, but will allow local campaigners to do activities that do not bring them into contact with voters, such as leafleting.

Ukip's manifesto was initially due to be launched on Wednesday morning.