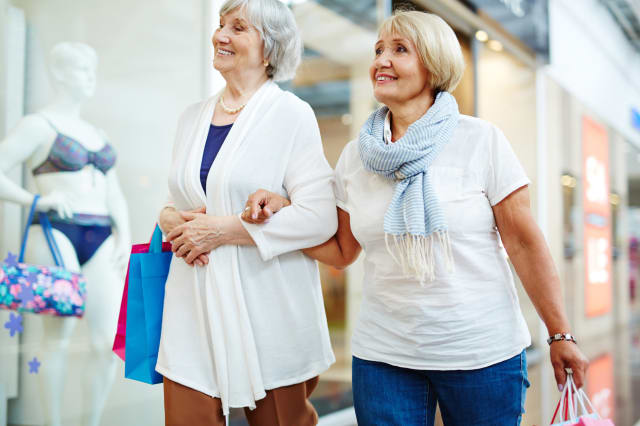 The over 50s outspent their younger counterparts for the first time in 2016 - splashing out an impressive total of £376 billion on the good things in life. This means the 'silver pound' contributed £119 billion to the UK economy - which begs the question of why businesses are so obsessed with selling to the young.

SEE ALSO: Celebrities cashing in on the grey pound

See also: Why do young people think money is the key to happiness?

The figures, from Hitachi Capital UK and the Centre for Economic and Business research, found that the silver pound is now worth over 6% of GDP. Crucially the contribution that the over 50s is making to overall spending is growing much faster than the spending of young people - three times faster in fact - which means that in every subsequent year the silver pound will carry more and more weight.

This is the result of a combination of forces. As people live longer, the number of over 50s is growing - and hit 23.6 million in 2015. Meanwhile, more over 50s are employed nowadays, and as a result are earning and spending more than before. Those who have retired are benefiting from the triple lock, which has helped push up retirement benefits by 15% in the past five years. And let's not forget that the Baby Boomers now fall firmly into this bracket - and this was the group of people who invented the consumer society in the first place.

At the same time, younger households haven't fully recovered from the last recession, and are struggling with sluggish wage growth - older people have seen wages rise more than twice as fast as those aged 30-49.

Robert Gordon, CEO of Hitachi Capital UK, comments: "Not only have we shown that this group is now the dominant force in the UK economy, but also that their contribution across jobs, spending and wealth creation is growing at a considerably faster rate than the under-50s'. We are now seeing the over 50's setting up and running their own businesses at a faster rate than any other age group, directly employing nearly 10million people, 2 million more than the under 50's."

It begs the question, therefore, as to why so many businesses continue to be obsessed with selling to younger people. Clothes are the most striking area where the number of brands targeting older people can be counted on the fingers of one hand - while those targeting people in their 20s over-run the high street.

With a very small number of exceptions (including M&S which has used Twiggy, Annie Lennox and Emma Thompson), there are very few aspirational fashion images shown to older women: adverts and mannequins don't tend to feature older faces or figures. When it comes to staffing these shops, meanwhile, the sales assistants are almost universally young, and in many cases exhibit something akin to horror if someone over the age of 50 dares walk through the doors.

Technology companies, meanwhile, are obsessed with Millennials. There's an enormous number of older people crying out for technology to make life easier and more entertaining, but there are no role models, sales strategies or brands established to help them embrace the latest gadgets.

In fact, according to Goldman Sachs, nearly two thirds of businesses focus their efforts on targeting Millennials, while Baby Boomers are being sorely overlooked. Meanwhile, the Institute of Customer Service discovered that 93% of them feel they are let down by customer service, and 49% say they have stopped buying products or paying for services as a result.

But what do you think? Are shops neglecting the power of the grey pound? Will they ever wise up to the potential of the older market? Let us know in the comments.

Whole towns could be forced into lockdown amid local flare-ups of coronavirus, government says