There's been a bizarre development in shoplifting. Rather than stuffing food into deep pockets or up jumpers, criminals have been opening multipacks of Walkers crisps in stores, and scattering the bags across the shelves. This weird twist on traditional shoplifting is all down to a new on-pack promotion.

SEE ALSO: Would you spend £45 on five crisps?

Walkers is currently running its popular give-away, where it has put money into selected packs. There are 250,000 £5 notes hidden in packs, and other prizes of up to £28,000. This time round, the packs with cash prizes in are 'lucky golden' ones (like the one pictured - which was won the traditional way), so can be spotted the second that people tear open the multipack bag. The shoplifters are therefore ripping open the multipacks, and hunting through them for a winner. 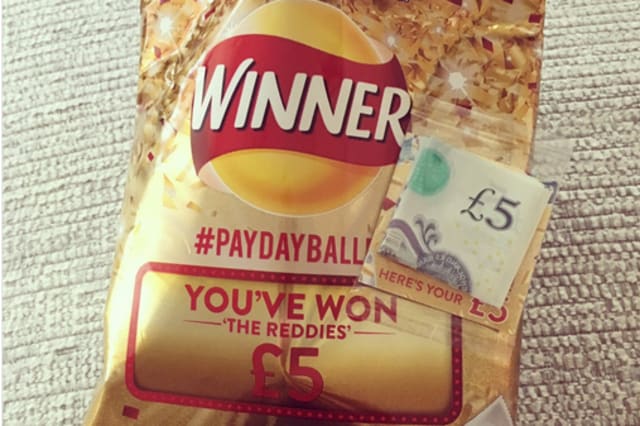 Supermarkets told The Sun it was a trend that had been spotted across the country - and in a number of different supermarket chains. Some of them noted that it was a sad state of affairs when people were forced into such desperate measures for £5.

When any brand runs a special promotion, there's always the risk it will have unexpected side-effects. Over the years, some of these unintended consequences have been fairly humiliating for all concerned. Here are five epic blunders.

1. In 2002 two streakers a New Zealand vs Australia rugby match ran across the pitch wearing nothing but the Vodafone logo. They were subsequently arrested, and the chief executive of Vodafone was forced to issue an apology.

2. In 2012, BMW decided to sponsor the weather forecast in Germany. It followed the standard procedure of naming a weather system - in this case it called it Cooper. Unfortunately, Cooper turned out to be a freezing weather system that killed dozens of people across Europe.

3. In the same year, McDonalds came to regret starting the hashtag #McDStories. The idea was to use stories from proud suppliers, expressing their happiness in being part of the brand. Unfortunately it was soon taken over by people with stories of their own - featuring everything from foreign bodies in the food to food poisoning.

4. Back in 2007 - when social media was much newer, and mistakes much easier, beer brand Molson took a spectacular mis-step. It ran a campaign to find the best party school in Canada, and asked drinkers to submit their craziest photos via Facebook. They then received an enormous number of photos from underage binge drinkers, and the promotion was cancelled

5. When Ghost in the Shell was released this year, it controversially cast Scarlett Johansson in the role of Major - despite the fact that the film was originally from a manga graphic novel, and most fans were expecting an Asian actress. They found a way to vent their anger at this 'whitewashing' when the promoters issued a meme creator, where people could upload their photos and text, so that anyone could 'become Major'. Among some of the most popular were: "I am the woman that should have been cast", and "I am expecting you to believe that I'm Asian".

8 PHOTOS
Top advertising icons that are no more
See Gallery

Top advertising icons that are no more

The lone cowboy quadrupled sales of Philip Morris' Marlboro cigarettes when he first appeared in the 1950s. Despite increasing evidence from mid-century scientists of health risks associated with smoking, Marlboro Man was influential in persuading the public to continue to light up.

Remember the little mascots for Robertson's jam? People sent away in their millions to the jam makers for golly brooches and other golly-related memorabilia. When Golly retired in 2002, the official reason was that children had lost interest in him. But many suspected the forces of political correctness were at play. Over 20m gollies were sent out by Robertson's in their heyday. Many have become valued collectors' items.

A boy and girl in ragged clothes catch the smell of Bisto gravy on the breeze and sigh longingly "Ahhh... Bisto." The advert, drawn by cartoonist Wilf Owen, first appeared in 1919. The gambit aimed to capture an 'Oliver Twist' quality, appealing to the 'urchin' segment of the working class market.

The yellow talking cartoon bird made his calls to advertise Post Office Telecommunications (now BT) perched on telephone wires. His catchphrase was "Make someone happy with a phone call". Bernard Cribbens provided the voice.

Beatrice Bellman was a popular character from a series of TV adverts by British Telecom, famously played by Maureen Lipman. She was a stereotypical Jewish mother and grandmother, with a heart of gold. Her adventures mostly involved nagging her long-suffering family over the phone. The name Beattie was a play on 'BT', as British Telecom later became known.

Toilet paper makers Andrex have chosen to digitise their iconic puppy for the first time since the dog hit our screens in 1972. The series of more than 120 adverts featuring a live puppy made even something as utilitarian as toilet paper appear cute - no mean feat.

A blue floating shost-like creature with a long pointed nose, he featured in an educational animation programme created by Nick Spargo for British Gas in 1975. Willo's job was to extol the virtues of gas. Actor Kenneth Williams provided the voice. Willo later went on to great success in his own TV series, before retiring into obscurity.