2.5 million have seen a neighbour in the buff - but this is good news 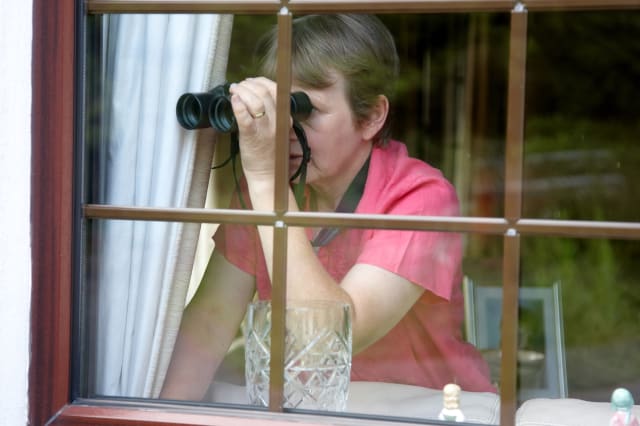 We're a nation of nosey neighbours. One in ten of us gossip about other people on the street, 3.5 million have checked up on them through social media, and 2.5 million have spied on their neighbours so often that they've seen at least one of them naked. However, before we start to panic about what our neighbours know about us, it's worth bearing in mind that a spot of nosiness could be very good for your finances.

See also: Are we forgetting how to be good neighbours?

A study, by 247 Blinds, found that London, Birmingham and Sheffield are the nosiest cities in the UK.

Londoners are most likely to be guilty of nosing through the windows of their neighbours' houses - which is why 328,000 of them have seen a neighbour with no clothes on.

Birmingham came a close second with 1 in 10 Brummies regularly gossiping about their fellow neighbours. Residents also admitted to regularly snooping around unsuspecting neighbours' houses, with 1 in 20 admitting to looking around when they're away on holiday, even though they had been trusted with a key.

Sheffield residents love a good peek out the window, the South Yorkshire city is most likely to be seen twitching the curtains to glimpse at what's going on next door, with more than 1 in 20 admitting to nosing out of their windows for gossip.

Why this is good news

Nosey neighbours may not seem like a terribly positive addition to your life, but there are three good reasons why nosiness is good for your pocket.

1) Pricing up your property
Finding the right nosey neighbour can make selling your home much easier. If you track down someone who knows exactly how your neighbours' homes are laid out, their condition, and how much they have bought and sold for recently, then it makes it far easier to price your own. Check out the family who have been in the street for years, who seem to know everyone: there's a good chance they're a mine of information.

2) Saving on council tax
Even if you plan to stay put, your neighbours can save you money. It's worth asking your neighbours what council tax band they are in. When the houses were valued back in 1991 for council tax purposes, they couldn't always do a thorough job, so they made some mistakes. If you find your neighbours with a similar price house are in a lower band, you can apply to have your home reassessed. It's important to know, however, that this won't always pay off. In theory your council tax could go up.

3) Saving on bills
If you know of similar properties in your road, a bit of nosiness on your part can pay off. Check what they pay for their utilities, because it's a great shortcut to see if you are on the cheapest possible deal. If there's a big difference, it's worth seeing who they use for gas, electricity and broadband, then when you're shopping round for a cheaper deal you could start with those suppliers.

4) Saving on insurance
If you have very nosey neighbours, then you'll have plenty of enthusiasm locally for a Neighbourhood Watch group. If you can plant the idea with a couple of the more enthusiastic snoopers - assuming they have some time on their hands - they may set up a Neighbourhood Watch scheme, which you can sign up to in order to reduce your home insurance premiums.

5) Save on home/pet sitters
If your neighbours are keen to have a look around, then you can give them a key next time you're on holiday. They can keep an eye on your home, draw the curtains, collect the post, and generally keep your home safer than ever. They can also feed the cat/hamster/rabbit for you, and save on the cost of a professional. In return, you both know they'll have a snoop around, so there's something in it for them too.

Gerard and Christina White from Moseley in Birmingham hit the headlines in September last year, when their neighbour ignored his planning permission, and built so close to their house that they said it effectively turned their detached property into a semi-detached one.

Despite the fact it left them unable to maintain the side of their property, the council washed their hands of the case, and said the couple would have to take private legal action if they wanted the extension to be pulled down.

Helen Coughlan, a 52-year-old carer from Woodford Bridge in north east London, was stunned when her neighbours built an extension just 24 inches from her window - completely obscuring her view.

Despite the fact she says it took £100,000 off the value of the home, and rendered it unsellable, the council said it could do nothing to force the demolition of the new extension.

In 2013, a row that had been rumbling for 17 years finally came to court. One of the neighbours had planted eight conifer trees in his front garden, and ignored repeated requests to cut them back to allow natural light into his neighbour’s home.

He was eventually forced to by a court - after the trees had caused a crack to appear in his neighbour’s wall.

Wendy and Paul Collins from Brownhills in the West Midlands watched in horror as their neighbours erected a six foot fence at the bottom of their front garden, blocking their front gate and leaving their car stranded on their front lawn.

Their home faces onto a car park serving a block of flats, and the owners of the flats erected the fence to stop the couple driving through the car park in order to park on their front lawn. The couple can still access their house through the back - and have a drive round the other side of the house - unfortunately their car is stuck on the lawn.

A Michigan man who had been through a bitter divorce, decided to get his revenge on his ex-wife by moving in next door.

As soon as he had moved in, he erected a 12 foot statue in the front garden, of a hand giving the finger. The statue is even lit up at night.

In May last year, Steven and Fiona Young from Blawith were ordered to pay their neighbours, Peter and Lesley Raymond, £600,000, after a campaign of harassment.

The Youngs had lived in a large farmhouse, but decades earlier sold up and moved to a smaller property next door. The Raymonds moved into the farmhouse and the Youngs became nightmare neighbours.

They piled rubbish in the garden, damaged fences, let animals foul their garden, and rode quad bikes over the grounds. When the Raymonds installed CCTV, Mr Young mooned them, and then painted over them.