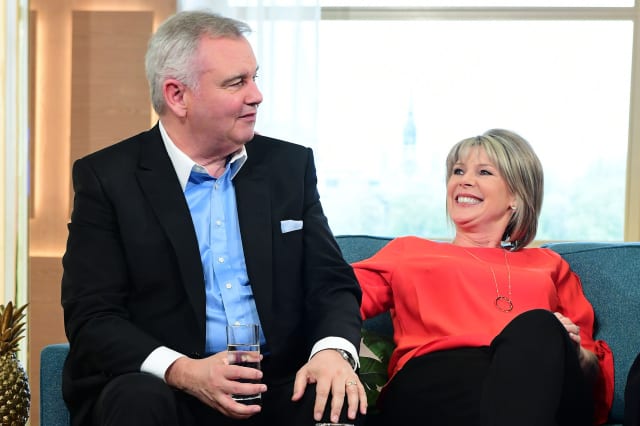 Holmes, who has hosted the show with wife Ruth Langsford every day this week, said he believes some people were intent on finding something to criticise.

The duo usually present the show on Fridays but take over full-time hosting duties from Phillip Schofield and Holly Willoughby during the school holidays.

During a call-in on Thursday's show, some viewers thought it looked like he had nodded off but Holmes said: "Yesterday fake news accused me of sleeping on the programme.

"It was a woman talking about committing suicide. When you watch it back it's one second that I look down.

"They are either saying that you are not interested or that you are being frivolous during that type of item so every single day we keep you lot (the press) in business."

"You can only be true to yourself. We are not accountable for what people think they hear or whatever fake news is out there.

"You can only turn up, do your job the way you do it, consistently. That's all you can do."

Langsford, who has been married to Holmes since 2010, added: "I think there are just people who are waiting for that kind of thing, that is what they do now.

"They are almost waiting for you to trip up, so I don't really worry about it too much."

Langsford, who is also a regular host on Loose Women, said the secret to their harmonious relationship on and off screen is to "keep talking and keep laughing".

She said: "We do laugh a lot. I think people say 'Eamonn and Ruth always bicker' and we do but we laugh a lot."

The couple will be taking their relaxed banter on the road when This Morning Live arrives at the NEC in Birmingham next month.

The four-day show will feature a home, garden and pets stage, a food and drink section with This Morning's chefs, a fashion and style element and beauty, health and wellbeing masterclasses.

All the famous faces from the chat show will be there, including style guru Trinny Woodall, resident medic Dr Ranj Singh and beauty guru Bryony Blake, while hosts Schofield and Willoughby will be interviewed on stage by Rylan Clark-Neal.

Holmes said: "You sit here during the day and think 'Who is watching this?'

"So it's a tremendous privilege that anybody tunes in and watches you and if we are important to them in any way and what we do on the show then it's just a lovely pleasure to meet them."

He added: "It will be a new variation on what we do, it is very personal because it breaks down the barrier of the screen between you and the viewers so I think it will be very nice.

"What people want is a selfie so it will be like being Santa Claus."

This Morning Live will be at the NEC in Birmingham from May 18 to May 21.