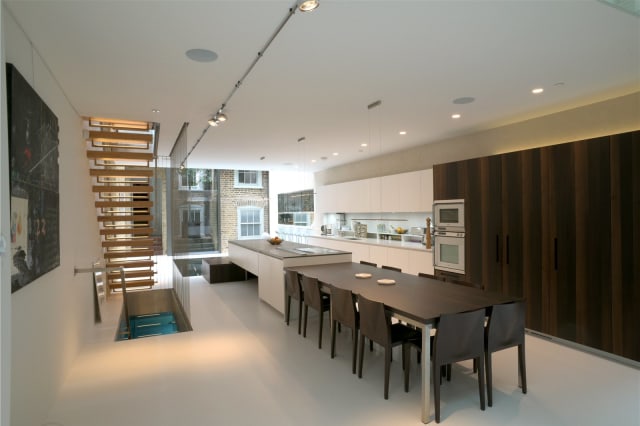 They say the kitchen is the heart of the home - and there's no doubt that it's one of the most important factors when looking to move.

According to a survey from MayfairGranite.co.uk last year, the most desirable features are a good size, with natural light and plenty of storage - the biggest turn-offs are dirt and dated cabinets.

It's easy to get discouraged when the perfect house turns out to have a grimy, gloomy cooking space - but a little perseverance will reveal that there's plenty of truly stunning kitchens out there.

From a Great British Bake Off finalist's home to a cosy farmhouse, we look at seven of the loveliest kitchens for sale right now. 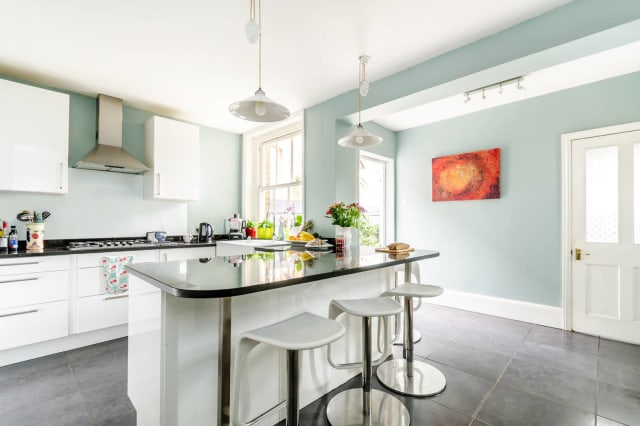 This double-fronted Victorian house is the property of Great British Bake-Off finalist Jane Beedle, who says she's ready to downsize now the children have left home. With six bedrooms, you can see why. There are two lovely reception rooms, and a stunning kitchen, where Jane came up with most of her recipes. It's on the market for £1,395,000 through Foxtons. 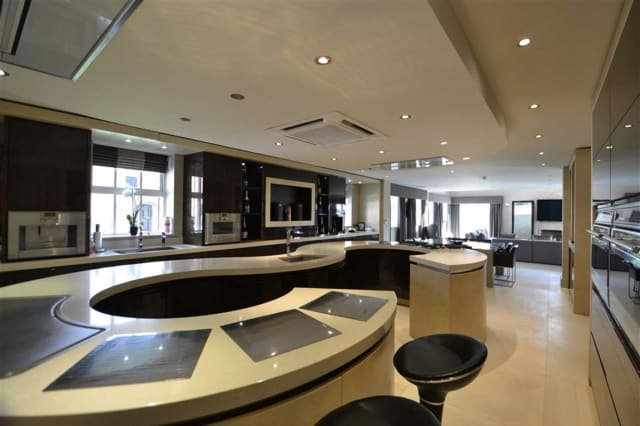 Newly-renovated, this enormous five-bed barn conversion comes with everything from a separate three-bedroom bungalow in the gardens to a swimming pool, jacuzzi and salon. But the huge kitchen is a particular feature, boasting a long, serpentine island snaking around. Kitted out in dark, glossy wood and cream units, it leads on to a dining area and day room. The house costs £5.95 million from agent Benson Bunch. 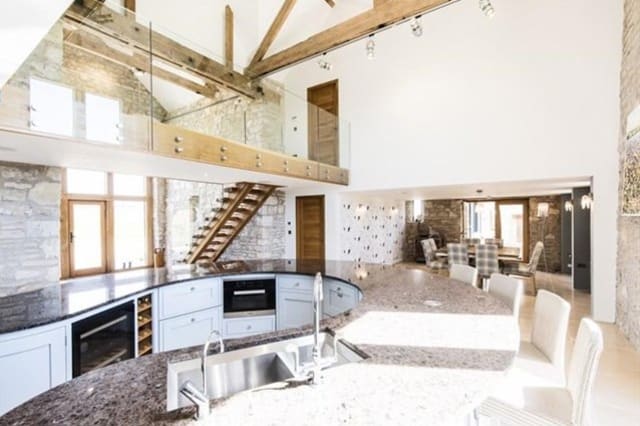 The amazing kitchen is just one of the many stunning features of this five-bedroom barn conversion. The double-height space hosts a bespoke Thomas and Thomas kitchen with units in a horseshoe-shaped configuration with built in appliances and granite work tops. There are double-height glass doors onto the garden, exposed stonework and a glass walkway spanning the space. You'll want to keep it looking its best, so there's a large larder and utility room to tidy everything away. Tythe Barn costs £1.5 million through agent Davies & Way.


Take a look inside Scotland's most expensive property 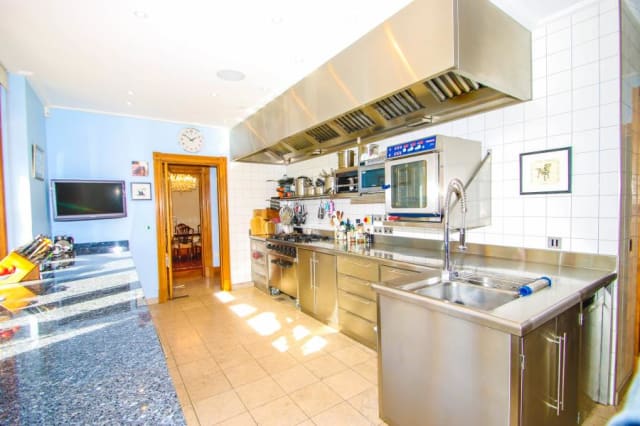 It's not the prettiest kitchen in the world, but it's certainly functional - and if you're wealthy enough to rent this eight-bedroom house you probably won't be doing the cooking yourself. It includes chef-grade appliances including a range oven, heated drawers, freezers, fridge, double utility dinks, a walk-in larder fridge and industrial extractor fan. The rest of the 14,000-square foot house is designed for luxury, with a 43-foot sitting room and grand, mahogany-lined study. The house is available to rent through agent Pillars for £15,750 a month. 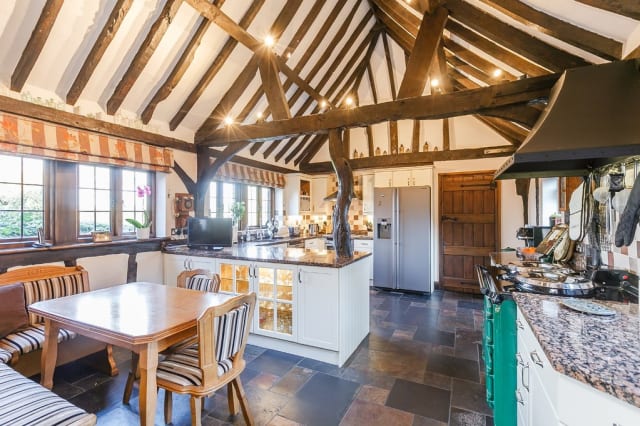 The most striking feature of this six-bedroom barn conversion is the lovely beamed ceiling, and the twisty timber rising from the breakfast bar. Integrated Neff appliances include a double oven, five-ring gas hob and dishwasher, and there's a Calor gas Aga too. It looks out over the lovely gardens that form part of the house's four acres. There are two ponds, a newly-surfaced all-weather tennis court and a heated swimming pool, as well as several outbuildings. The house costs £1,350,000 through agent Morgan & Associates. 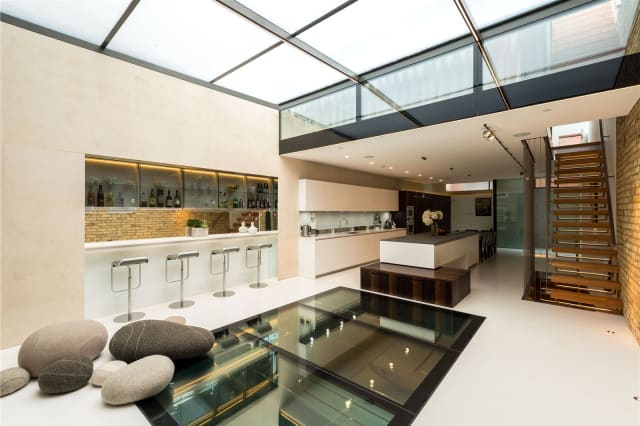 The outside of this Grade II listed Georgian house gives no clues to the space within. The 53-foot kitchen, housed in a new extension, has a glass panel ceiling which can be frosted at the touch of a smartphone button and an incredible cantilevered staircase leading up to a family and TV room. The bespoke Boffi kitchen has Gaggenau cooking appliances and opens onto a courtyard with a cherry tree. There are six bedrooms and a basement swimming pool. But all this doesn't come cheap; it's a touch under £8 million through agent Hamptons International.

What will the average property price buy you around the UK? 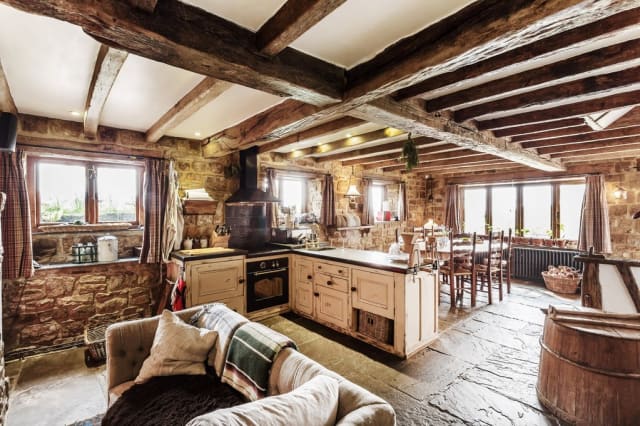 Believed to be a former 18th century threshing barn, this five-bedroom home has a separate one-bedroom annexe. The cosy kitchen is as traditional as can be, with a stone flagged floor, exposed stone walls, a wood burning stove and plenty of beams. There are lovely views towards the neighbouring Ashdown Forest, an Area of Outstanding Natural Beauty. The house costs £1,675,000 through agent Robert Leech.

This five-bedroom, £4.5 million property was built in 2009, and designed to impress - with an indoor pool, sweeping staircase, a state of the art kitchen, feature fireplaces, a gym, and a bathroom for each of the five bedrooms. It seems to have worked, as the property had 14,000 views in a month.

Did someone say footballer?

At the other end of the affordability spectrum, there’s a good chance that the attention this two-bedroom flat is getting (17,000 views in a month) has something to do with the fact that it costs just £113,000. In Newport that buys you two double bedrooms and an allocated parking space near the city centre.

This is a stunning home in Padstow, boasting six bedrooms, an impressive vaulted entrance hall, open-plan living, and an outdoor pool.

However, the most striking aspect of the property has to be the incredible views all around.

This stunning eight bedroom property is set on an estate owned by the Crown in Oxshott in Surrey.

For your £5.5 million, you get an impressive indoor gym and pool, plenty of entertaining space, a master bedroom suite complete with mirrored dressing room, and separate staff accommodation. The grounds are fitted with extensive security and CCTV, so nobody will ever get inside. While it's on the market, of course, we all get a chance to have a look around, and in one month 34,000 people have.

This beautiful four-bedroom house on the Isle of Skye is just £100,000, which makes it a reasonable proposition as a holiday cottage or bed and breakfast.

It has been recently renovated too, so you won't have a maintenance mountain to climb before you start. It’s a great place to view while you dream of a remote island life - which may be one of the reasons why 41,000 people have viewed it in a month

This six-bedroom newbuild looks fairly traditional from the outside, but inside has opted for a sea of shiny white flooring, a shiny white kitchen, and a master suite that comes with its own (shiny white) dressing room.

This four bedroom detached new build in Grimsby comes with some footballer essentials - including a shiny white kitchen, Bi-fold doors onto the terrace, master bedroom suite with dressing room and a free-standing bath in the family bathroom.

This new build in Cheam, in Surrey, is advertised without a price. But given it has six bedrooms, a swanky kitchen and bathrooms, a games room, several sitting rooms, and Bi-fold doors onto an impressive garden (built for entertaining ), you can safely assume you’re looking at several million pounds. You can have a look yourself, and decide what it’s worth, after-all, 92,000 people already have in the past month.

Tucked into a cul de sac in Gerrards Cross, this five bedroom detached home (built in 2011) comes with an imposing triple garage.

For the petrol head who moves in, there are also three reception rooms, five double bedrooms (four of which are en-suite and one of which comes with a dressing room). It’ll cost you £2 million, so take your time having a look first - joining 150,000 people who have nosed around in the past month.

This five bedroom detached home in Lanark is the most viewed property in the country, with 212,000 views in a month.

Clearly people are intrigued as to how they can get an immaculate detached five bedroom home for less than £200,000 - over £500,000 less than the average asking price for a five bed house in the UK. The answer is, of course, that Lanark is home to some incredibly affordable property - so this constitutes a pricey property for the area.